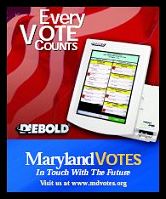 At Piney Branch Elementary School in Takoma Park, officials quickly ran out of paper ballots and began telling voters to use scraps of paper after electronic balloting ended at 8 p.m., said Dennis Desmond, who voted with an ersatz paper ballot.

Officials, he said, were calling out the names on the ballot while people wrote down their choices on blank paper. Desmond estimated that 50 people voted that way. Voters also were asked to provide biographical information about themselves as election officials attempted to make the ballots legal.

He said that election officials dispatched a worker to a nearby store to buy envelopes and masking tape so the ersatz ballots could be enclosed and sealed.

In addition to the front-pager we reported on last night from today's Washington Post covering Maryland Governor Bob Ehrlich's call for a return to paper ballots in the state this November, WaPo has two additional stories today underscoring the desperate need for the LET AMERICA VOTE ACT to be passed immediately by the U.S. Congress. The simple proposal I've made calls for Emergency Paper Ballots to be mandated at every polling place this November in the face of machine breakdowns from coast to coast all primary season long.

One of the other two WaPo stories on this today, this one by Marc Fisher, on the front page of the Metro Section headlined is "If Paper Ballots Restore Trust In Elections, Let's Switch." It includes this information in response to last week Primary Election Meltdown:

The obvious solution, as Gov. Bob Ehrlich said yesterday, is to put the machines in the closet (actually, returning them to the store is an even better idea; does anybody in Annapolis still have that receipt for $106 million?) and go back to paper ballots. The governor bemoaned flaws in the Diebold electronic poll books that Maryland used for the first time last week to check in voters: "Technology is a wonderful thing, but clearly, given their apparent inability to function appropriately --- when in doubt, go paper, go lower technology."

...As well as this extraordinary exchange from MD's embattled Democratic State Elections Director and Diebold apologist, the not-yet-resigned, Linda Lamone...

I asked the state's elections administrator, Linda Lamone, whether Maryland wasn't just a bit too quick to adopt electronic voting. Doesn't the computer at your desk ever freeze up on you?

But surely people in your office have had that experience?

(Maybe we've found the solution to Maryland's voting problem: Everybody head on down to Linda Lamone's office, where the machines work 100 percent of the time.)

Does this sound like a woman who is open to solving the problem or more like someone beholden to a $106 million contract with Diebold, the machines' Ohio-based manufacturer?

As Robert F. Kennedy Jr. reported today in Rolling Stone, Lamone has been a menace to democracy in Maryland since at least 2002 when she allowed Diebold to come in and take over the state and both run and ruin their elections thereafter.

She has asked the front-group organization Election Center --- they're sponsored by both Lamone's own National Association of Election Directors (NASED) and the Voting Machine Companies themselves! --- to create a fox-like report on what's wrong with her Maryland henhouse.

The other story, posted only on the WaPo website, has several alarming first hand observations from poll workers, inspectors and voters. Here's a few of the highlights lowlights...

Barbara Abramson, a chief judge at the Rockville Senior Center polling place, described her experiences as the worst in her 20 years as a judge.
...
"We heard from the voters that we have to stay open until 9," she said. "It is really very upsetting. It's ridiculous. . . . People are upset about the machines anyway, security; there is no this, no that. Can you imagine what would have happened if something like this had happened in a general election? I don't even want to think about it."

At Piney Branch Elementary School in Takoma Park, officials quickly ran out of paper ballots and began telling voters to use scraps of paper after electronic balloting ended at 8 p.m., said Dennis Desmond, who voted with an ersatz paper ballot.

Officials, he said, were calling out the names on the ballot while people wrote down their choices on blank paper. Desmond estimated that 50 people voted that way. Voters also were asked to provide biographical information about themselves as election officials attempted to make the ballots legal.

He said that election officials dispatched a worker to a nearby store to buy envelopes and masking tape so the ersatz ballots could be enclosed and sealed.

At Rock View Elementary School in Kensington, Lauren Anthone didn't have to wait in line long, and the electronic cards had been delivered by the time she arrived about 11 a.m. But the computerized summary page that allows voters to review their selections did not display all the results, she said in an e-mail.

"The screen 'chopped off' names at the bottom of the screen as though you were supposed to scroll down the page, but the page did not scroll," she said. "By tapping the category heading on screen, you could review the selections you had made but could not confirm them in the summary. There was no way to verify that the person you voted for was counted correctly."
...
How can we 'spread democracy' around the world if we can't make it work in Kensington?"

"In the past, at least three people manned the initial entry area before funneling people to the voting booths. The woman handling this machine said it had been overheating all day, and that this polling location had been promised three machines, but only received one.

"As your paper [columnist Marc Fisher] noted, the situation was worse than many Third World countries. I have observed national elections in Uruguay, and they were a lot smoother than this," [Karen F.] Travis said in an e-mail.

« PREVIOUS STORY "'LET AMERICA VOTE ACT' Picks Up Steam in Media and Congress..."
» Go to The BRAD BLOG front page «
"An Election Official With Integrity and Who Cares" NEXT STORY »

WOW So this is an issue where the Washington Post is "out in front" of atrios, americablog, c&l, fdl, kos, digby, greenwald, and the rest of the superblogs?

Yes but WaPo is still behind the BRADBLOG like everybody else. Tell them all to catch up!

Be sure to thank HAVA,.. Bob NEY,.. Diebold,.. the fascist warmongers,.. and KKKarl Rove for this privatized vote counting/tabulation mess.

we got to see the bilbray vote screwed by hastert, it will happen again if they are allowed to. I am fortunate enough to live in a state that requires only paper ballots.
My question and suggestion, is to create a reason for a jurist in your state to throw out voting machines for a reason under law and require paper ballots be instigated as the only likely way to get a fair vote.

for once the vote is had, congress appears to be able to declare whomever they want the winner. this disenfranchises the voters in that district, that state, this country. should this not be a crime?

we have only our courts left folks, for there is no spine in mudville

I apologize if this has been posted already.
From an e-mail sent by the Donna Edwards campaign: "Al Wynn Brags of Stealing the Election." There's a video of the incident posted in the comments.

It's unbelievable that the democrats here in maryland are totally united in blocking Erlich's every attempt to go for paper. I just don't get it...

I believe, Miss P, that if we could follow the money your perplexedness would dissolve, or crystalize, whatever...

I doubt my reps would do anything, co-sponsoring wise, but here's some persuasive ammunition:

Let's make sure our voting processes stay ahead of The Gambia's... Not to knock the place, I've been there and the fish dishes are amazing, but maybe people will respond to national pride?

(They have widespread illiteracy, so for ballots, they've carefully rigged up metal cans with bells, you put a marble in the chute for the can marked with the photo & name of the can-didate, ha ha, and it triggers a bell so that no-one can vote twice.) No paper trail, but also no buggy software.

Is there such a thing as a fourth world country?
What next! The "republican rebels", McCain, Grahm, and Warner fail to stop George from getting his torture pass.
Wow, that was quite a rebellion guys! Thanks!

Maybe they can start torturing protesters and then billing them for it. Does that sound crazy. Does anything sound crazy anymore!

Watch this all get fixed/corrected (oops! 'fixed' was a poor choice of words), when the Dems win in a future election. Then the Rethuglicans will scream fraud and the machines will be tossed out! That's what it's gonna take, me thinks. But will they throw it to the Bushie's Supreme Court to decide in the meantime?

Have you read the latest about the fact that the right to vote is nowhere in our Constitution? Maybe all this stuff is moot??? Who needs fair elections, if there is no right to vote? Who will try to act on that one?

#11
The right to vote is inherent in democracy. Don't be lame. No vote == No Democracy.