Further to yesterday's post about Open Voting Consortium and Raging Grannies working together to resist Hart InterCivic machines on behalf of the voters of San Mateo County, we have bad news and good news.

The Grannies will not give in. We are surprised, but not shocked, at the vote of the Board of Supervisors of San Mateo County, CA today, to approve purchase of the Hart InterCivic Voting systems. As for the Grannies plans now.... Our street theater is going on the road, wherever election protection is needed! 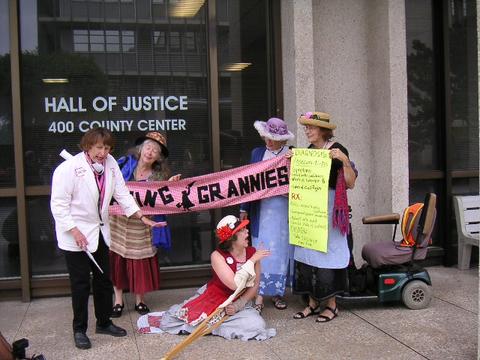 Here's a photo from our dramatization for the press in front of the Hall of Justice building where the Supervisors met. Several newspaper photographers were on hand to document this event.

Our play: Debbie Does Democracy is as follows:

Debbie (in red t-shirt) is suffering from Loss of Voter Confidence and Lack of Civil Rights. Here she is seen being treated by Dr. Jane Q Public with injections of Robust Audits and Software Transparency. All roles played by Raging Grannies.

The San Mateo County Board of Supervisors broke their tradition today by voting to contract with Austin, Texas based Hart InterCivic for Hart to provide the County with electronic voting machines. The decision was met with jeers from an audience comprised predominately of members of various election protection groups.

"We are greatly saddened, to say the least," stated community activist Brent Turner. "We apprised them of the pending legislation and potential litigation but they did it anyway --- we showed the supervisors the scientific conclusions regarding a general lack of security as well as evidence regarding direct partnerships held by Hart that inappropriately connect them with the Republican Party. The supes ignored the scientists and the activists and the appearance of impropriety." One such activist, Ruth R of the activist group The Raging Grannies, was visibly dismayed by the decision. "When you’re in San Mateo County you are in Raging Granny territory," said Ruth R. "This is not the last they’ll hear from us".

Activists and computer scientists from all over the country, including notables Alan Dechert and David Dil, converged on San Mateo early last week as County official Warren Slocum moved to present the contract to the Board of Supervisors. Slocum had previously been considered an ally to the Voter Rights community. The purchase of the machines was opposed by all groups unanimously throughout California. Key issues cited were security and voter confidence.

The crowd at the Tuesday morning meeting bristled as an obviously nervous Slocum touted an ethics award the Texas based company received in 2002. The award has been greeted with skepticism as an attempt to conjure up a warm psychology in San Mateo and elsewhere. "We are not impressed by a meaningless plaque," responded Turner.
"We want transparency and disclosure of the systems and the political connections."

Conversations brewed around the courtyards after the ruling regarding the filings of civil rights lawsuits and preliminary injunctions. Many vocally dismissed the proceeding as shameful and some citizens broke into tears as the decision was made.

« PREVIOUS STORY "Art Levine: 'Salon's shameful six' --- states where vote suppression could cost voters their voice --- and Democrats the election --- in 2006"
» Go to The BRAD BLOG front page «
"It's About Time for Another Open Thread" NEXT STORY »

This battle is not going to be won
from the living-room sofa. Come November I hope it
does not get as nasty as Mexico seems to be heading.

Fascists are never to eager to hand back the reins
that control the workings government.

Think we might be able to get Obrador to help save democracy in the US? There are a millon people in the Zocalo (sp?) doing jobs no American workers seem able to do... They're all invited to MY guest worker program!

Great series of articles on the Mexican election at NarcoNews... two important points, that the evidence of fraud WOULD NOT EXIST if eVoting Machines had been used... and when Fox's party booted the corrupt PRI, they took over the vote stealing apparatus... we've got to make sure we get REAL reform, not just new slipcovers on the old problems...

Video of this event taken by myself will be up on google video soon. Approval is "pending" (sigh). Probably sometime tomorrow, check here on in the BlackBoxVoting.org video archives (picture of camcorder in the top right of the main page).

« PREVIOUS STORY "Art Levine: 'Salon's shameful six' --- states where vote suppression could cost voters their voice --- and Democrats the election --- in 2006"
» Go to The BRAD BLOG front page «
"It's About Time for Another Open Thread" NEXT STORY »
See MSVL and support BRAD BLOG! Click here for signed premium version!