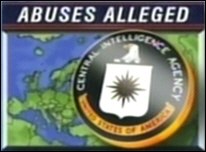 Earlier this week, a European Parliament committee released a report saying that the CIA had illegally detained people and used secret 'rendition' flights to transport them to other countries or secret CIA prisons where they were expected to be tortured.

Several members of European Parliament met in Macedonia today to investigate the story of Khaled El-Masri, a German citizen, who was abducted by the CIA. After being kidnapped, he was then 'rendered' to a U.S. prison in Afghanistan and held for 5 months.

ISN SECURITY WATCH (Friday, 28 April 2006: 10.38 CET) ? European parliamentarians are on a two-day fact-finding mission in Macedonia, investigating claims that US agents arrested a German citizen there and sent him to Afghanistan for interrogation.

The European lawmakers arrived in Macedonia and Thursday, a day after a parliamentary committee released a report alleging that the US Central Intelligence Agency (CIA) had run 1,000 illegal rendition flights within the EU since 2001.

The European Parliament committee investigated the alleged CIA activities in Europe for over three months, during which time it interviewed top EU officials, magistrates, human rights activists, and people who claimed to have been kidnapped by the CIA.

"The CIA has, on several occasions, clearly been responsible for kidnapping and illegally detaining alleged terrorists on the territory of member states, as well as for extraordinary renditions," the committee's spokesman, Claudio Fava, told reporters.

The report did not include mention of an ongoing investigation into allegations about secret CIA detention centers in Europe.

Check out this article in the Christian Science Monitor for some insights on how the European public is forcing the EU to investigate US human rights abuses. The report concludes that many European countries were actually complicit in the 'rendition' flights. European leaders want to cooperate with the Bush's War on Terror (although they won't call it war). In contrast, the European people have a great disdain for the United States' Government's illegal operations.

Our Corporate Media has refused to report on this important story in National broadcasts. To their credits, PBS NewsHour did quickly mention the EU report. BBC News and BBC World News were broadcasting several extended for several days after the report war released.

The video has both the PBS and BBC coverage. If you know of other National networks that covered this story then please let us know.

We can't, in all good conscience, keep being "the silent majority"!
It's not just Americans that Bush & Co. are injuring, it's others in the world too--especially Iraqis.....
It's OUR government that's criminal.
It's OUR duty to stop it.

CROOKSANDLIARS.COM IS A GATEKEEPER. THEY BAN ANYONE WHO QUESTIONS 9/11. BRADBLOG.COM MURDERS C&L.look at this crap: Site Monitor: No, you've asked this question before and it's been answered. Take your 9/11 discussion elsewhere. Edited By Siteowner Dept Of Homeland Conspiracy Homepage 04.28.06 - 2:39 pm The siteowner has asked that speculation on 9/11 be taken to another site. Thanks for your cooperation. Site Monitor Homepage 04.28.06 - 12:09 pm # [deleted] Site Monitor here: You have repeatedly ignored the siteowner's request to not discuss this on this blog and further, you have repeatedly insulted the siteowner for this request and others who don't share your view. You are banned. Edited By Siteowner Chris 04.28.06 - 9:01 am # BOYCOTT CROOKSANDLIARS.COM!!!!!!!! BOYCOTT ALL GATEKEEPERS!!!! SUPPORT BRADBLOG!!!!!!

My America has been for all of my life, the example of how to do human rights.

The ameriKa of this republican dictatorship is the phoney fascist bu$hit regime that draws the ire of all things free, all things humane, and all things "kinder and gentler".

I'm glad this is getting more attention in the US. It's been discussed quite openly in Europe for months. For example, it was the headline of Sunday papers in Ireland. (It appears that some of the CIA rendition flights have passed through Ireland's Shannon Airport. Ditto for airports in Scotland, UK.)

I read on Steve Clemens' thewashingtonnote.com that a Green Party Member of the European Parliament (MEP) plans to come to the USA soon to speak about this.

Do people in the States really know that America is literally kidnapping citizens of foreign nations - friend and foe - and dissapearing them from the face of the Earth?

How many Americans believe it when they hear it?

How many Americans believe that only osama's posse are rendered?

How many Americans believe that American citizens are gitmoed?

I bet you all didn't know Bush was also The Unsignerer!

Gee I wonder why he did that?

Gosh - Cheney and Powell are among those listed here also!

Dredd, "My America has been for all of my life, the example of how to do human rights."

For forty years between 1932 and 1972, the U.S. Public Health Service (PHS) conducted an experiment on 399 black men in the late stages of syphilis. These men, for the most part illiterate sharecroppers from one of the poorest counties in Alabama, were never told what disease they were suffering from or of its seriousness. Informed that they were being treated for “bad blood,” their doctors had no intention of curing them of syphilis at all.

Or how about rounding up all the Japanese Americans during WW2???

When the Nazis/Hitler rose in Germany & invaded other countries for nothing but gain & became nothing but criminals, it was the duty of the German people to stop it. They were afraid because they would be killed.
They didn't stop their own government when it ran amuck & look what happened...

Our situation has not quite gotten that bad, but it's well on it's way, don't kid yourself.

We have to shove them to impeach Bush & Co. NOW.
We must let them know we are on to their game, stop listening to them, & shove them all into doing what WE say for a change.

Listen up you Dems, we got yer damn consultants right heaahh baby......!!

America has lost it at times as you say.

I am talking about what Amnesty International reports over the years, and how that has changed so much now. America was far better.

No country, since power corrupts, will have a perfect record, but America has had better days. By far better days.

We apologize for this current fascist regime, and seek to get back to better days. After we throw the bums out and put them in jail.

Absolutely appalling. This isn't the country I grew up in...even if it hid a lot of ugliness over the years. Now the criminality is blatant, over-the-top and in-your-face. The mobsters have truly taken over our most "sacred" institutions.

I would like nothing better than to "throw the bums out". Impeach, indict, convict, throw away key.
I think, though, that the system & the people in it are so corrupt & so sewn up that trying to get that done is like a long, slow slog through quicksand.

I think hundreds of thousands storming the White House with pitchforks & torches is not unwarranted...is in fact long, long overdue; but A..it isn't gonna happen, and B..we'd be billy-clubbed & tear-gassed & reported as being "a handful of leftist crazies" by the MSM.

Might be good if ALL of us got out there like the freeway blogger & put IMPEACH signs all the fuck over the place...otherwise it's letters to the editor, signing petitions, donating, calling lawmakers' offices, joining a protest, holding a sign. It rolls off them, like shit off teflon. Some of us write wonderful books or go on talk shows or host great blogs...alright, I'm beginning to annoy MYSELF here.

You get the point. They have the power sewn up.

What a great idea!