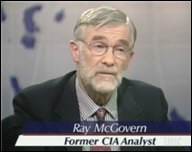 I watched this last night. The other guy, Kerr (who reminded me of Dennis Hastert) was adamant that it was bad for the functioning of the agency as a whole (FBI or CIA) to tolerate any kind of whistleblowing. McGovern stuck to his guns (rightfully so.)

McGovern has an open type of mind. His decisions are based upon the evidence before him.

We must have leakers when the government has become a blood thirsty republican dictatorship that can only think of trigger happiness as the happiness of heaven.

Richard Kerr is the type of 'ends justifying the means' CIA beurocrat that's caused our nation so much trouble over the last 50 years. When he states that the agency operates outside of international law he's right, but only in regard to international espionage law in conducting intelligence gathering within the borders of other sovereign nations. There's no justification for the execution of war crimes, assassinations, or kidnappings.

His philosophy regarding checks and balances is based soley on faith that the agency can regulate itself and that Congressional oversight will keep it from going astray. Unfortunately the agency's history tells a very different story.

I hope the CIA turns en masse against these war criminals. Great post.

THIS is precisely the kind of discussion that gives me hope.

Hope that other Americans in positions where they can REALLY make a difference and put an end to Chimpy's MOST VILE and offensive practices and work to reclaim our NATIONAL SOUL.

I find it interesting. Oh and crooksandliars.com has a good post up about how the GOP was to purge the CIA of democrats.

Ray kicks ass, Ive always had alot of respect for him and I think the guys a Republican, go figure.

Kerr's remarks a to how this(National Secrets) need to be kept under wraps and have no business becoming public, and his shaming of Mary, yada yada yada, lacks any amount of depth. Sure, National allegiance dictates that when National Secrets become public knowledge, then those that you are shielding those secrets from become informed of said secrets.

We saw this with wire tapping and now renditions. Why is this? Because if those National Secrets get spilled and reviled that said programs run counter to law, they might be criticized as being illegal.

How else to operate illegal operations but in secrecy?

At the end, Kerr rehashes the clichee fall-back argument that we're at war with an unconventional enemy, and that therefore the rules are essentially moot.

I HATE this argument!! It absolutely kills me. It's up there with fundamendalists who tout the Bible as the direct word of God, because it stifles any sort of ideological dissent.

On several levels, this needs challenging.
First: why do we tolerate the desecration of the rule of law during wartime? Though some laws may need to be changed, why can we not find a set of laws that are suitable and stick to them through war? If an illegal act needs to be done in defense of country, shouldn't the perpetrator be willing to pay the legal consequences, akin to one who conducts civil disobedience (ala whistleblowers)?

Second: What constitutes wartime? Is it only if we declare we're at war? Who gets that power? Does the simple act of being in a fight constitute wartime? How about Nicaragua, Grenada, Lebanon? Are there different degrees of wartime, depending on different degrees of threat? It seems to me that we are not in a situation in Iraq that should be considered wartime, because we have chosen the fight ourselves, meaning the only dangers facing us are of our own creation.

Thirdly: If wartime is going to be invoked in limiting our rights, the extent of the war should be well-defined in a logical sense. The 'War Against Terror' doesn't count as a war in my book any more than the 'War On Drugs'. The 'enemy' in both cases is ambiguous ... possibly foreign, possibly domestic. The battlefield is ambiguous. The tactics on both sides are ambiguous. The length of the campaign is unending. No one would allow the campaign against drugs (I'm not gonna use the word 'war' on these anymore) to be used as an excuse for torture or rendition or other acts that violate international law ... why do we allow the campaign against terror to be used as such? Drugs kill thousands of people too, and they scare communities too ... in fact, drug trafficking could still be considered worse than terrorism if we looked at them objectively.

My view on terror ... it should be treated under national and international criminal laws, which would be adapted from existing laws (especially considering that most violent crimes can already be considered terrorism). The notion that illegal acts are necessary to stop terror is overblown, imo. If defending the American people requires acting illegally, I repeat that the person should be ready to pay the legal consequences and consider themselves a patriot. If an attack sneaks through that might amazingly have been stopped by torture or somesuch, we should proudly weather it, turn the other cheek, and return to living as a nation that honors the rule of law.

Sadly, uttering the word "War" and showing video of a bomb expoding seems to be enough to cow a simpleton like Kerr and turn him into a sheep for the administration.

Thank you Mary for getting the truth out. These self righteous bastards don't live up to American laws although they represent our country which is why the bushit dictatorship of losers must fall. Like in comment #9 stated, using a line like "fighting the war on terror" might work for their followers however American people and people who had respect for our country's freedom and design understand very well that this is like saying "we're not patriotic" if we don't support their Iraqi war agenda. Keep "we the people" in the dark to get away with their ANTI-AMERIKAN actions and only put out propaganda bushit in the mass media is the battlecry to never be exposed. Ms. McCarthy amongst other things felt our country must not be afforded secracy from this vulgar display of power. Real American Hero.

Hear! Hear!
What a well said argument for our rights! I think I'll print this and keep it around somewhere to remember the points when I talk with some of my less-than-knowldegeable pals.

I wonder how many Mary McCarthys were attempting to speak out when the Nazis started sending people off to the camps.

How far does secrecy go? Are we allowed to know if our government is starving/burning/gasing families to death?....Or does that fall under "the protection of national security"too?

When is some brave soul with clout like the "Generals" demand that Bush and Cheney take a polygraph.? I realize it would never happen...but it might expose the hypocrisy and slow down the threats.

Shannon, thank you for the compliment, but I sincerely hope there are better arguments against the use of wartime as an exceptional circumstance in current developments than what I've just spat out. Yes, I think about this issue a lot, but I hope there's better.

I'm going to look around for a while to see if I can find something. If not, maybe I've found my niche. All I can say is I ain't going to let us sleepwalk into an Orwellian state of perpetual wartime.

If the Federal Government offers no "internal" means for government workers to voice concerns of wrong doing or illegal conduct the only recourse
left is for these governmental workers to go
"external" - clandestine reports to the media.

The problem is the government is not working -
the oversight/review process is broken,..