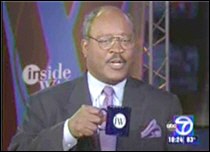 Colbert King, Deputy Editor of the Washington Post, appeared on this Sunday's edition of Inside Washington, a political show that's broadcast in the D.C. area. Mr. King was asked to defend an editorial recently published in the Washington Post which was titled "A Good Leak." The editorial supported President Bush's position that he participated in partial leaks of the National Intelligence Estimate for the good of the public.

From Mr. King's response it was clear that he had differences but attempted a defense of editorials flawed arguments:


MR. PETERSON: Colby, I want to ask you a question about your newspaper because the lead editorial in your newspaper on Sunday was entitled "The Good Leak," and it was about the leak of intelligence information that went through Cheney to Scooter Libby and then to Judy Miller and so forth. Why ? now, the president can do whatever he wants with intelligence; why a leak and why call it a good leak?

MR. KING: Well, I'm deputy editor of the editorial page, so let me first take a sip of my Kool-Aid ? (laugher) ? and step up and take one for the team. What we were trying to say is that the president had every right to declassify the information and present to the public the information from the National Intelligence Estimate that supported that particular argument about the attempts on the part of the ? of Saddam Hussein to acquire ?

MS. TOTENBERG: You can spit it out.

An editorial with a different opinion of President Bush's leak called "A Bad Leak" appeared in Sunday's The New York Times.

This broadcast first aired on Sunday, April 17, 2006. The full transcript is available from the Inside Washington site. More details are available at The Raw Story.

Dueling Editorials - I love it!

What really steams me is this excuse that since every paragraph in the document was marked "S" for secret Valerie Plame wasn't undercover!

What a pile of hogwash.

Charles Krauthammer is a piece of shit. I don't know if I hate any editorialist more than I hate him. What physical condition does he have...anyone know?

Since that's not what Bush did, the guy is FOS.

Bush didn't release the information to the American people.

He released it to JUDAS MILLER, so she could convert it into propaganda.

And it wasn't declassified when he released it, since the president does not have the unilateral right to declassify anything he likes, although we have lots of 'legal experts' claiming that, including cats like Josh Marshall.

There is a process. It is not left up to one man; at least, not in our democracy. In Bush's tyranny he can nuke his nextdoor neighbor for fun. Agreeing with a traitor's 'rights' under our democracy is meaningless insanity. He violated his oath of office a million times --- so he DOESN'T have the right to do ANYTHING other than defend himself in court.

I had interviewed Larisa recently. Part 3 has just gone up "Bad Leaks and Good Leaks"

(Sibel is the good leaker)

It's clear the Washington Post has become an editorial arm of the Bush administration. Just like Pravda during the Cold War.

A president may select bad intelligence that he has been told is bad intelligence, declassify and leak that portion only of a larger report (because it happens to coincide with his predetermined goals), leak it to a cooperative reporter to mislead the American people...and the Washington Post calls this a "good leak?"

What, then, is a "bad leak?" No prostate jokes, please.

I'm not sure I've ever read this writer before, but I LOVE her style!!!

.
.
.
And if you believe Bush declassified the NIE before it was leaked, I have a fallout-free nuclear bunker-buster bomb I would like to sell you.
.
.
.

All these members of the Post who keep defending the editorial are using the most idiotic logic I've ever seen to defend themselves. they keep focusing on the idea that Bush has the right to declassify whatever he wants to support his claims.

Fine, you believe BUsh ahs a right to do what he did. BUt that has nothing to do with what YOU have done, and that is knowingly allow lies and misinformation to be published in your paper for the sole intent of spreading Republican talking points. This is proven by the FACT that the Post had access to the truth and facts (as published that exact same day) but still decided to allow the editorials, which they know most impressionable people read, to lie and make claims totally contrary to the facts. That makes the Post little more than a propogandist rag.

The reporters failed to ask Bush in-depth questions re his "declassification" of the NIE to Judith Miller.

In fact, Bush "declassified" only a PORTION that supported his claims for war.

He did NOT "declassify" the other portions, the majority of which showed he lied about his claims for war.

How could it possibly be that only ONE portion of the report was worthy of being "declassified" because it was "in America's best interest", but the rest of the same report was not worthy?

Bush is so full of shit.