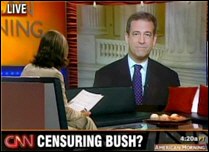 CNN's Soledad O'Brien proved to be an effective proxy for the GOP noise machine as she challenged Feingold's proposed censure of Bush with flurry of misleading Republican talking points.

Not to be too critical of Soledad but she may be in over her head by sparring with Senator Feingold on the subject of illegal wiretaps.

Senator Feingold introduced the censure proposal yesterday on ABC This Week. You can see the full interview with George Stephanopolous here.

Feingold is expected to introduce the censure resolution in the Senate today.

If Senator Feingold walks up to Senator Pat Roberts, chair of the Intelligence Committee of which Feingold is a member, and says "Here is my proposal to censure the president".

Senator Roberts, who has held up the Phase II part of the inquiry into the lies leading to the Iraq invasion and occupation, and who killed the NSA oversight hearings, will say what to Feingold?

Committees have jurisdiction on what legislation goes to the floor. Feingold is in the minority on the committee that oversees "intelligence".

Chairman Roberts can decide to schedule committee hearings or not. Reject the proposal or not.

It is DOA until the November elections when the people vote the republican dictatorship out.

What are this womens qualifications anyways. I see that reporters are still good at making excuses for this president.

lets see today CNN bad tomorrow CNN good.today its republican talking points. tomorrow democratic talking points.dems are losing elections are at a furious pace from dog catcher on up and they just wallow in the SOS.blaming BIG oil, tobacco, news media,bin laden, iraq, katrina, social security, haliburton, on and on SOS. when it gets down to the elections the republicans will gain strength and enlarge thier grip on AMERICA just watch and spew hatred. But when the chips are down no one really cares about cindy or her book, hillary is fluff, clooney and hollywood are all losers and gay marriage will never ever be accepted but all will lose elections.

Soledat should STFU. Try being a journalist for once in your life. Or how about a Patriot? BUSHCO BROKE THE LAW...now let's deal with that. It's not politics, it the Constitution! Go RUSS GO!!!

Pro-Constition or Anti American
You're with US or you're a TRAITOR!

Well... I've done MY part... I've both called and e-mailed Senators Murray and Cantwell and asked them politely but forcefully to join Sen. Feingold in voting in the affirmative AND to work with Sentors of both parties to obtain their pledge to vote in the affirmative as well.

Wow Barry.. your first post (that I"ve seen) and you come out like a true blue moron! Congrats!

Did you even watch the clip? Do you even know what this thread is about? Well, it's clear you don't care.. so what's the point. Typical dipshit content on being a partisan mouthpiece with no brain attached.. and a hate-monger to boot! nice

I watched the clip.. What I find amusing is, she says "I disagree, I think there IS a debate about if it was legal".. uh.. twit.. you're talking to the AUTHORITY on the subject, not some underpaid overworked stage hand who happens to think your ignorant Repug beliefs are offensive so you dismiss him out of hand and down your nose.. When someone on the JUDICIARY COMITTEE says "it's clear he broke the law", you can't tell them "uh.. as a reporter [rethuglican talking head] I have to disagree".

Censure is WAY to nice, and I think the ONLY reason Feingold isn't going for impeachment is because he knows the CORRUPT REPUGS won't do the "right thing", they never do. Then we sit and listen to an INDICTED politician talk about things being "political"? what a tool.. Kind of like Barry, there..

She ain't no Amy Goodman, that's for sure! She is a typical dip-shit CNN airhead with nothing to offer.

Well, it's 1pm EST and no Feingold
Censure. I think they have quelshed it!

And here we go again!

I am so sick of the sick, preverted, way the House and the Senate are run!

Waynemadsenreport for the ties to terroists in the repub and dem party. Surprise, surprise Clinton protegee' Wes Clark is amonsgst them. Forgive spelling. At least Feingold shows where his heart is whether it goes anywhere or not. Letter from Harry Reid, I think on Firedoglake over the weekend. "When I came out against organized crime in Nev. , I was harrassed by FBI and the mob. Bomb in my family car." We don't know what honest politicians are going through. Think Wellstone.

When Soledad comes on, CNN clicks off at this house. Who DOES she think she is??

Soledad was in over her head when she was talking to Dev Null on "The Site" on MSNBC. She simply isn't news program material.

It was the proper thing to do. Feingold is correct.

The dorkette doing the interview was in a hurry to go spray more plastic on her body. The Deibold smell.

Bush should be impeached but the rubber stamp republican congress helps him maintain his regime.

Nothing but voting the dictatorship out in November is gonna change things.

Well, okay, she reads the copy okay, drinks the kool-aid.I think that some of the questions she and others ask are to seem provocative and timely, and have no sinister agenda as it would appear from the nature of the script.

She's bought and paid for by the Bush Administration.

Brian Williams is another great example!

Brad
You called it. She was in over her head. And for those who think she isn't news anchor material, you're wrong. She's perfect. Beautiful face with no brain. What more do you want?

PS
Russ Feingold and John Conyers are the only two politicians that care about the constitution and are willing to say something. Pat Roberts and Bill Frist are just weasels. Sorry, jackasses. (And that's insulting to weasels and jackasses.)

Soledad is clearly not a smart cookie, but I guess she thinks being "aggressive" (as opposed to intelligent) is going to win her some ratings.

But I thought Russ dealt with her very patiently and diplomatically. Amazing all the b.s. he has to put up with, being a voice of reason in DC.

well, the rest of Dems are useless:
http://news.yahoo.com/s/...n_go_co/feingold_censure

How about a VR petition to Howard Dean & the Dems demanding they grow a spine and stand with Feingold on this one?

Want to talk about corruption?

For those that still don't get it, these guys get paid over $150,000 a year and STILL use our tax dollars for perks. They are JUST LIKE CORPORATE OFFICERS.. in that they suck up money from places it doesn't need to be pulled from so they can have perks!

Our "representitives" are NOT in D.C. to "represent us", they are there to FLEECE US. We have to STOP letting these people do this shit, it's rediculous. There is NO reason Congresspersons can't drive their own cars.. millions upon millions of Americans have to do it because they don't have someone they can CON into paying for them.. why should our PUBLIC SERVANTS be allowed to STEAL MONEY FROM US when they CLEARLY DO NOT NEED IT? AND, they are getting "cost of living increases" every year (unless they vote to not get it).. what cost of living?? They are using OUR MONEY for their "expenses".. bullshit.. (and just found out that Congress voted to give the pres a $400,000 salary starting in 2000.. so shrubby is making near 1/2 a million dollars a year to fuck us.. NICE)

and still I can hear the snoring of the masses.. /sigh

They're all fucking hypocrites. Get rid of the lot of them (cept Russ). Ah what the hell. Him too. After he impeaches these fucks Bush and Cheney. (Yeah like that will really happen)

Frist said that he hopes Iran isn't listening, to Feingold introducing censure. Did you see that?

Mr. Frist: I hope Iran isn't watching YOU condoning breaking the laws of our nation!!! Feingold should've shot that back at Frist. Mr. Frist: You are an idiot, and you should not be in politics. You said that aids can be contracted via sweat, and Terri Shiavo was not brain dead. Mr. Frist: YOU ARE BRAINDEAD!!!

Frist is unethical and inarticulate. He is the perfect red state candidate. Am I wrong?

Wants to be President
of The United States of America,..

He won a Republican straw vote
for most likely Presidential Candidate - 2008
down in Tennessee,.. this week-end.

Could you not see him in the White House,..
for those of us who might not be properly
covered by a health insurance policy,..

Just dial up the White House,..
President Frist will give you a diagnosis
over the telephone.
Your health insurance needs,..
now that base will be covered.

The Nations President,.. and the Nations Doctor,..
(now if we could get him to make house calls)

Where can I get one of those
political buttons to pin on my lapel ?

Cantwell is a waste of both space and good breathable air. www.votemark.org Mark Wilson needs support. I would rather a Republican was in office (retch) than a Dem who acts like a Republican 95% of the time. At least with the Repug there's no illusion.

Senator Frist = Treason First, or, if you prefer palindromes to anagrams, "No golf oh ho flog on!"

That's not a palindrome. It's an anagram.

Very good site. You are doing great job. Please Keep it up... .!

Very good site. You are doing great job. Please Keep it up... .!