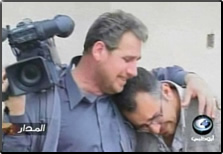 As violence surges in Iraq, the death toll for journalists has risen to a new high. Depending on the source, between 76 and 82 journalists have been killed since the war began.

While covering the bombing of a revered Shi'ite mosque, Al-Arabiya's Atwar Bahjat and two of her colleagues were shot by two gunmen. Atwar Bahjat had recently left the Al-Jazeera television network for pro-American Al-Arabiya network. She was widely known and respected in the Arab world.

At Media Matters website, they are making much of a graphic of Cavuto's show. The frame around the talking heads has a caption asking "Is there an Upside" to total civil war in Iraq.

Nothing is offered in the way of transcripts. The reaction in the blogs has been "Is Fox totaly without simple humanity?" that they should suggest or even extol the virtues of civil war---if only by raising the question on screen.

I offered no sympathy at all for journalists in this country (like the ABC man and crew) who were injured some weeks ago. I think they are part of the problem. I mean the American Press, in general, refuses to report and talk about the events right here in America that continue to exacerbate deterioration in national security EVEN WHEN THEY ARE SAFE WITHIN THESE SHORES, let alone when they are overseas with the troops.

Foreign news agencies and reporting are washed out within the American sphere--even in benign settings like the Winter Olympics. I have no clear idea what they are reporting about Iraq now--but I have read what they reported in the run-up to the War and the early stages of the conflict. They are more forthright in their description of the damage and chaos than our own well-dressed reporters.

Journalists killed in the line of their duty. There is no upside to that. But our own brand of mainstream journalism is killing us.

The Fox Network wants us to believe they have the guts to report "real politik". They want to think the unthinkable thoughts on the airwaves as proof that "we can handle it". What a pathetic and perverse expression of arrogance--reminiscent and every bit as repulsive as Jack Nicholson's sneering at Tom Cruise in the movies. Self-righteousness of this sort is never pretty, but Fox is in the service of sanctifying it.

They're trying to drown our Democracy in a bathtub,as the notorious Grover Norquist once advocated,so they can turn our country into a prison camp for dissenters!!We are indeed being poisoned by the Outrageous and Brutal reign of the Bush Regime!!When the Truth hits these nonbelievers,too damned DUMB to see the truth,then it will be too late!!Cowards who refuse to see the truth for what it is,DO NOT DESERVE FREEDOM,when they blindly allow Bush to lead them over the cliff!!

This many journalists killed and still we hear the administration claiming that the journalists are not reporting enough good stuff about Iraq. Apparently it's too freaking dangerous there for people to do so.

And when will we realize how vital journalists can be and how much courage their work can take.

What's even more astounding is that the Pentagon went on record at the war's commencement announcing it would shoot any non-embedded journalists. Read about it and more belief-beggaring facts here:

Some good news for a change! From the LATimes:

"In the new report to Congress, the Pentagon also said the insurgency was losing strength, becoming less effective in its attacks and failing to undermine the development of an Iraqi democracy."

Now we know why the MSM is a lap dog to the fascist regime ... they are afraid ...

The fascist regime wants the news to go like this:

"Think how many journalists were not shot this week"

"Think how many laws the prez did not violate this week"

... They want to condition us to their incompetent way of governing, so we get used to it ... well ... they can shove their ideas right back up the brain between their legs from which their government originates ...

The speech given by the Hon. Ron Paul on February 15, 2006 before the U.S. House of Representatives deserves to be circulated to as wide an audience as possible -

Subject: War with Iraq, to be followed soon by war with Iran - why?

Well put, we are being poisoned and it grows worse daily. The war train is aiming to Iran and I feel like a paying passenger who can't make it stop. I have started a campaign to show how many of us want our troops, tax and reputations out of Iraq. In a world so full of bad news, we need to focus and that is a hard thing when each new morning raises more alarms in our heads.

I believe the majority of people the world over object to the war and feel we need unity, a clear and obvious show of how many of these splintered groups and individuals there are around the world who object to the war in Iraq. Like many, I write against the war (poetry mainly and on Counter Punch) and I feel I am banging my head against the brick wall of my government. I set up a visual campaign on January 14th 2006 that seeks to SHOW how many of us there are against the war in Iraq.

ARMS AGAINST WAR asks anyone who wants an end to the war in Iraq - for whatever reason - to wear a strip of torn white fabric around their arm until the war ends. This small gesture seeks to show our numbers, to cross the boundaries between us and unite all regardless of faith, location, belief, politics, colour etc. It is free, no purchase required. It is legal and cannot provoke arrest. It is being active all the time but peacefully. It can be worn on TV and in 'no protest' zones. Many cannot afford to attend marches or buy merchandise that states their opinion, still more find it hard to relate to the activities of anti-war/peace groups as they have other items on their agenda ie: socialism, communism, ecology etc. that individuals may not agree to in their entirety. ARMS AGAINST WAR asks only for one opinion on one subject - do you want an end to the war in Iraq.

My belief is that for the many, many people around the world who individually don't know how to be active - this is a step into activity. This simple symbol empowers me each morning and I am conscious always of the reason I wear my armband.

I am doing my best to publicise this campaign but could use all the help I can get - it is just my sister and I here in the north of England who have started this. I have had some wonderful support and help, but a virus attacked my site and the publicity has to start all over.

I ask you (beg you?) to please wear this symbol to help raise awareness of just how easy it is to start publicly objecting - enough visible objectors would have to show up in even the blinkered media and show the governments just how much objection there is to their policies. Whilst people remain inactive - the government accepts this as complacency and the war train keeps going. I am scared for what will happen next in Iran and feel that all actions are a matter of urgency now.

Thank you for your valuable time and I wish you both peace and strength.

to jeannie, eppie, dredd and you other morons who have never set foot here and never will, never met an Iraqi and would gladly hand them back over to the people that routinely torture and kill as they did w Bahjat, you disgust me and are as dangerous to the Iraqis as Saddam was. Coalition soldiers and Iraqi soldiers and police are the thin line standing between the currect situation and full-blown civil war. The insurgents are encouraged by declarations that the US is not here for the long term, much less you of the "pull-out now" crowd who would willingly leave them to the real murderors. I came back here because there is work to do to protect the innocent here. You would sacrifice them to get Bush. How sad.

« PREVIOUS STORY "For Whom the Trolls Call..."
» Go to The BRAD BLOG front page «
"In Memoriam..." NEXT STORY »
See MSVL and support BRAD BLOG! Click here for signed premium version!