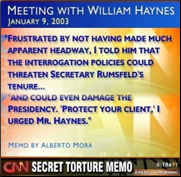 A recently revealed secret memo from general counsel of the U.S. Navy warned the Bush Administration to halt the "disastrous and unlawful policy of authorizing cruelty toward terror suspects."

The New Yorker exposes the secret document (PDF) in a newly published article by Jane Mayer. In an interview with CNN American Morning, Mayer said:


It's clear that [the Bush Administration ] were consistently resisting any criticism on this... instead of listening to [the Navy counsel], they basically found another lawyer, somebody in the Justice Department named John Woo, who told them what they wanted to hear which was they could pretty much do anything they wanted.

It was a policy decision on their part. This wasn't an accident - what happened at Guantánamo and what later happened at Abu Ghraib in terms of mistreatment of prisoners. They did this with their eyes wide open.

UPDATE: The name in CNN screenshot above should be spelled "John Yoo" instead of "John Woo". For more information on the history of torture policies in the Bush Administration and John Yoo, check out this video from the CBC report "A Few Bad Apples."

.
.
.
Here's a diary I made that sums up the Maher extraordinary rendition case. Let us not forget that the U.S. sends innocent foreigners to be tortured in foreign lands as well. Arar had his case thrown out in court againt the U.S. government.

Those neocon web designers need to come up with a new template, lol

I believe his name is John Yoo, not Woo. He's a law professor at UC-Berkeley.

Yoo (Woo) was pitching woo to Gonzales, too. When Yoo was criticized, he went back to his egg foo yong, then hid out in the loo for a while. Now Bush is in deep doo-doo. Boo-hoo. The White House is quite a zoo, isn't it?

And all of them have been promoted for their fascist views, even as we speak.

No wrongful deed, in terms of traditional American jurisprudence, has gone on without promotion.

Torture is so absolutely non-American it is unthinkable ... yet this fascist republican regime relishes it!

John Woo is pro torture too...

I mean have you SEEN Mission Impossible II and Paycheck!?! Ugh!

So wait!!! Hold on here a second!!! HCOCDR said that the torture was isolated incidents that went no higher than the people doing it, and Bush and the higher ups had no knowledge.

MY BULLSHIT DETECTOR WAS RIGHT!!!

Here's something else to be pissed off about. Looks like abortion rights are a thing of the past.

Torture endangers the troops.
Bush knew.
Bush knowingly endangered our kids/spouses/etc., recklessly disregarding legal advisors and decades upon decades of military precedent,
...Bush sent troops into harm's way
and then MADE IT EVEN MORE DANGEROUS.

Of course Bush knew. But torture is a perfect example of the way this administration operates.

They get a guy like John Yoo, or Gonzales, to come up with a rationale that torture (or domestic spying, or releasing classified information, or whatever) is legal. Then they say "We don't do that," which means "We don't do whatever that illegal stuff is, and if anyone is caught on film doing it then it was that person's idea and we're not responsible for it." Then they keep on doing it.

"The chair of each committee and a majority of its members represent the majority party. The chair primarily controls a committee’s business" (link here).

How many democrats, independents, greens, etc. chair committees in the senate or the house? (Zero)

Therefore, republicans are where the power and the accountability of congress lies.

Both the White House and the Congress are republican controlled. All the Cabinet is republican.

It's a republican thang that has allowed torture.

The legal structure of our congress does not support a multi-party system, and is designed really for a two party system. This is not good.

Under the law of the House and Senate, "the Senate divides its tasks among 20 committees, 68 subcommittees, and 4 joint committees" ... "The chair of each committee and a majority of its members represent the majority party. The chair primarily controls a committee’s business" (link here).

Take an example where republicans win 30 seats, independents win 28 seats, greens win 29 seats, and democrats win 13 seats. We can now easily see that this will not work well.

So, in our system, the majority of seats would be governed by the minority 30 seats.

Anyone see any way to improve this?

Dredd #12.. Yeah, have each chair fully voted on by the members.. that is, put all the "candidates" for a position on balots and have a vote. The guy with most votes wins the chair. Then you can have the chair appoint members to the comitee, perhaps limiting the number for a given party to be no more than 1/2 the total seats on the comittee..

You are correct in that our system is pretty broke. As it is, "majority" is only "one view" in our 2 party system.. and with Repugs making sure they walk lock-step on most issues (regardless of individuals not liking what they are doing), we lost the "representing constituents" angle we're supposed to have. Break all that up.. go right "full vote" on most issues..

and, of corse, stop letting "chair persons" shut down a "vote".. if someone makes a motion for vote, and it's seconded, there NEEdS TO BE A VOTE.. no more of this bullshit of "I said no, that's it"..

That would work better.

It would not take any of us very long to come up with a better mechanism than the current one.

Perhaps best of all would be to reflect the will of the people. Perhaps pro-rata representation would be better.

Getting rid of the majority party aspects of the senate and house cluster screw would help in and of itself.

There must be many better ways than the current way of doing it.

Libertarians, greens, independents, and the rest should be given a voice if the people elect them.

Lets keep on this until the majority cluster screw is done away and just a whisper from a despotic past.