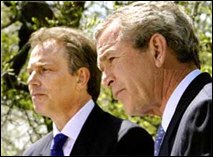 Last November, The Daily Mirror published details of a "top secret" U.K. memo revealing that President Bush wanted to bomb headquarters for the al-Jazeera news network. At the time, The Mirror quoted its' source saying:


"He made clear he wanted to bomb al-Jazeera in Qatar and elsewhere. Blair replied that would cause a big problem.

"There's no doubt what Bush wanted to do - and no doubt Blair didn't want him to do it."

While the story has gone largely unnoticed in the U.S., British media and al-Jazeera have continued investigating. Check out this earlier Brad Blog report for more backstory.

Political pressure to release the memo increased this week when British lawyers retained by the al-Jazeera network announced a lawsuit filed against the U.K. that requests the leaked memo be made public. Soon after, Downing Street officially denied that the memo has anything to do with the bombing of al-Jazeera. But the Downing Street spokesperson would not reveal what the memo did say.

In the following video, Sky News reports on the new lawsuit and the mounting political pressure.

Well, I don't think Bush really was intending on bombing Al Jazeera news, obviously he was very upset and perhaps thinking about it. And that threat was very strict.

I'm sure Cheney was already signing up F-16s to go bomb it to bits. He's totally insane, out of his mind, Cheney is not even remotely "all there". I seriously doubt though that even Bush would have really done this, I think he was angered by them, and no doubt the neocons were planning to just blow the whole place up.

While my judgement is still out on Al-Jazeera per se, I must commend them on having some balls and going after this thing!

Too bad we don't have an MSN outlet with the same fortitude to reveal what is really going on over here!

Doug - With Cheney spoon feeding him, you may be giving Bush too much credit. I'm not so sure he wouldn't have done it.

Of course not knowing exactly what was in the memo clouds the issue.

You can bet your ass that Bush wanted to bomb Al-Jazeera because he's as crazy as Cheney. They had already bombed the network in Baghdad, killing one reporter in the process and writing off the whole incident as an "error."

These mofos are pure evil and I applaud Al-Jazeera for having the balls to pursue the conversation between Blair and Bush. GWB knows he mucked up and has pulled the zipper on the whole affair. Blair won't release the data because it will dampen the infamous duo's plans to bomb Iran.

proof that the pancake theory is impossible? are my calculations wrong?

Anyone got the story where they bombed the network in baghdad? (Link?)

Doug: I don't have a link to the incident but I remember it happened right after "shock and awe" in 2003. I think Al-Jazeera was hit by "mistake," somewhere near the quarters where many reporters were staying, maybe the Palestine (sp) hotel.

I don't have it with me right now, but I'm pretty sure that incident is referenced in Danny Schecter's documentary "Weapons of Mass Distraction." Which is a great video, BTW.

Doug and Lou - here are some links:

Having been glued to the tv at the time, I can say that there were the usual initial reports that somehow always manage to vanish after the official line is known. In both cases, there was AMPLE room to suspect they were not accidents, and I'm almost sure somebody IN their Baghdad office was hit by sniper fire as well during the initial hours of our entry into the city. Hard to claim THAT as accidental.

I heard they had to talk Bush out of bombing the NYTimes & WaPo, too!

This is news to me, maybe not so much for others.
Link

Sorry about that. My browser doesn't seem to support the links.

Not news to me, Jeff. The amazing thing was that the Secret Service let it happen. It may have been a plot to start exactly that conflict, and do away with the, mortifyingly-chimp-like, frontman for this fascist administration.

I imagine they suggested he might bomb the Mayo clinic, but he refused because he preferred to catsup on bombing something with Heinz on it.

not very good humor, is it? blech

Doug, et. al. I don't recall where I read it (probably Raw Story), but there was talk of 2 places hit (as pointed out above, Kubal and Baghdad). The Administration said "oops, our precision guided missles got a little squirrly there, sorry".. Kind of what they say when they blow up wedding parties (sorry, was on Raw, I don't have links to all this stuff, but you can find them.. rest assured) and houses with women and children in them.

Make NO mistake.. Bush isn't beyond killing innocents to get his way.. Are we all forgetting the HORRIBLE inconsistencies in Sept. 11, 2001??? There is NO way any "sane and rational" person believes the "official stories".. they make no sense.. they defy logic and science.. there's a LOT more to it. Do you -really- think that an Administration that is at MINIMUM complicant in such things would NOT have warm-fuzzies about blowing up "a bunch of Arabs who are getting in the way"?

I hope like hell Al-Jazeera gets the docs.. and I hope like hell it finally PROVES just how psychotic our illustrious leader really is. His supporters are just as nuts so they don't see the serious damage he's doing to our country and the world.. but the rest of us apparently still need a little more to convince the "almost as nuts" Republican leaders to act. I'm not sure we can wait another year until the new Congress conviens (nor am I convinced that our election system will be working well enough to unseat the crooks who've stolen their seats).

What would be wrong with blowing the shit out of that propogandist "news" agency? I welcome it! Al Jazeere is simply the mouthpeice of the enemies of our great country, not a unbiased news resource.