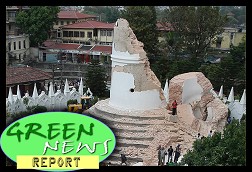 IN TODAY'S RADIO REPORT: Devastation and rescue in Nepal after massive earthquake; March 2015 the hottest March on record; Sardines crash in the Pacific; PLUS: Fighting climate change with the power of poo... All that and more in today's Green News Report!

« PREVIOUS STORY "Daniel Ellsberg Discusses Obama's War on Whistleblowers; Plus: Nepal Earthquake; Baltimore Protests & More: 'BradCast' 4/27/2015 (Now Daily!)"
» Go to The BRAD BLOG front page «
"The Gyrocopter Guy and Why He Did It!; Plus: Riots and Reason in Baltimore: 'BradCast' 4/28/15" NEXT STORY »