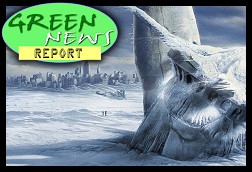 "Satellite data from 1994 to 2012 reveals an accelerating decline in Antarctica's massive floating ice shelves, with some shrinking 18 percent, in a development that could hasten the rise in global sea levels, scientists say."

Since a SLR of 3 ft. will be catastrophic, look to Greenland for now (The Agnotology of Sea Level Rise Via Ice Melt).