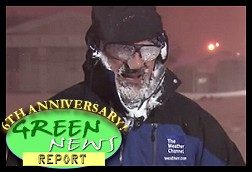 IN TODAY'S RADIO REPORT: Influence of climate change on our schizophrenic extreme winter weather; Scientists say geo-engineering is madness, but we should study it anyway (CUE THE CHEMTRAILS!); Shell Oil nixes plan for Canadian tar sands mine; PLUS: There's a sucker born every minute: man makes money off of bottled snow... All that and more in today's Green News Report!

THANK YOU for sharing the last six years of environment news and snark with us!