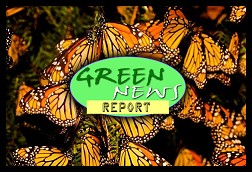 IN 'GREEN NEWS EXTRA' (see links below): Geoengineering is dangerous and 'should not be deployed'; Heavy metal in your valentine chocolate?; New Tesla battery will power your home, and maybe the electric grid, too; BOMB-Shell CEO calls for "carbon pricing system"; Fox host: 'We had to give up our freedom' during snow storm because climate change is a hoax; Oil CEO says worse to come for oil industry; Total Oil report $5b loss; Native Americans protest bison killings... PLUS: VIDEO: Thanks Dr. Evil! Fossil Fuel Propaganda Misfire Goes Viral... and much, MUCH more! ...

How is this for odd:


"Likely the closest biblical examples of what could be considered climate change would be the end times disasters prophesied in Revelation 6–18. Yet these prophecies have nothing to do with greenhouse gas emissions; rather, they are the result of the wrath of God, pouring out justice on an increasingly wicked world. Also, a Christian must remember that God is in control and that this world is not our home."

The Pope presents quite a different view it would seem.

(Doom Is A Government Department - 3, @comments). When an article of faith is contrary to life, we have a serious problem, because about 100 congress members have this article of faith.