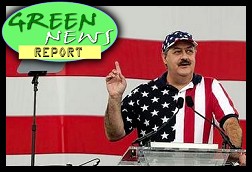 IN TODAY'S RADIO REPORT: US Senate floor fight fails to pass Keystone XL pipeline; Can Congress override the President next year?; Native Americans say KXL is 'an act of war' and vow to fight the pipeline on their land; PLUS: Finally! Accountability for the 'Dark Lord of Coal': Don Blankenship indicted on criminal charges... All that and more in today's Green News Report!

Satellite tracking CO2 tells quite a story and exposes denialists.