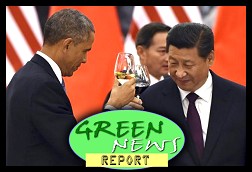 IN TODAY'S RADIO REPORT: Historic climate deal between U.S. and China: it's the deal Republicans said could never be done; Hope breaks out for international climate treaty negotiations; Republicans freak out at home, while scientists say it's not enough, but it's a good start...(Also, BREAKING: Coal mine owner Don Blankenship indicted...) All that and more in today's Green News Report!

IN 'GREEN NEWS EXTRA' (see links below): Coal mine boss Don Blankenship indicted for mine explosion that killed 29; Why those 5 cent charges for plastic bags actually work; Keystone XL Pipeline: Lame-Duck Congress Fast-Tracks Legislation; Why The U.S.-China Climate Deal Makes Keystone XL Pipeline An Even Worse Idea; IEA Warns Fossil Fuel Trends Dire; Lightning Will Increase With Warming... PLUS: Pope Francis: “Unbridled consumerism” will have destructive consequences for the planet ... and much, MUCH more! ...

The beavers knew what to do before we turned them into hats.

Sorry, but I watched a public television program the inventor of the television might have approved of.