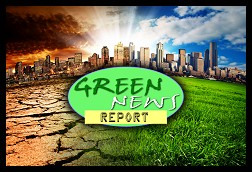 IN TODAY'S RADIO REPORT: "The science has spoken": final UN climate change report - the bad news, the good news, and room for hope; PLUS: Flashback: 25th anniversary of Margaret Thatcher's historic climate change speech --- back to when conservatives accepted science ... All that and more in today's Green News Report!

IN 'GREEN NEWS EXTRA' (see links below): Your next electric car may not even need a battery; Who’s really been running W.Va. all these years? [cough-COAL-cough]; California’s strawberry industry is hooked on dangerous pesticides; Rich countries subsidize oil, gas, coal by $88bn a year; Worker deaths hit all-time high in Alberta; Amazon.com doubles down on coal; Water treatment plant run by solar power; BP foiled again ... PLUS: Will China help Obama save the planet? ... and much, MUCH more! ...

The wobbling intellect of Steve Stockman (R-Bullshitistan) was called out by the scientist he misquoted in a congressional hearing (Wobbling on Climate Change).