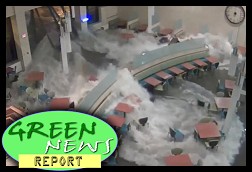 IN 'GREEN NEWS EXTRA' (see links below): Oil companies fracking into drinking water sources; More critical U.S. energy facilities face rising flood risks; Electricity blackouts have doubled since 2003; Rules block solar panels in many states with abundant sunlight; Japan replaced half its nuclear power with energy efficiency... PLUS: 'Natural capital': putting a price on nature is a neoliberal road to ruin ... and much, MUCH more! ...

Brad,
I was just up in Vancouver BC today. Big news is the verdict finding Canadian conservative operative Michael Sona guilty of using robocalls to misdirect opposition voters to the wrong polling stations. And who says the American conservatives have a monopoly on actual election fraud. Take that Ann Coulter. (Now if only we could get OUR judiciary to wake up.)

Thanks for the update, Soul Rebel! Imagine that! Accountability! Seems to happen everywhere but in this country

I recall doing an interview with a Canadian news outlet for a documentary on that issue some years ago. So, glad to hear how things worked out! Thanks again for the heads up!

Beginning today, a heat wave is forecast for Greenland (Heatwave to hit Greenland).

Dredd, one of my all-time favorite movies is The Hunt for Red October. The climate issue is reminiscent of the scene near the end of the movie where Tupolev has his torpedoes come back on the Konavolev and his navigator turns to him and says "You arrogant ass. You've killed us.". We are being sunk by our own'captains' of industry.