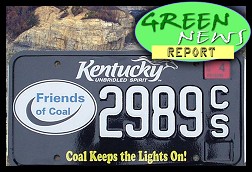 IN TODAY'S RADIO REPORT: Debunking Neil Cavuto of Fox 'News' and the 1970's 'global cooling' myth; Anti-science nuttery alive and well in Kentucky...and Mars; BP oil still contaminating fish in the Gulf; Canada's tar sands linked to cancer spike in First Nations tribes; PLUS: Popular pesticide may be killing off the birds and the bees ... All that and more in today's Green News Report!

"One thing is for sure on the subject of global warming induced climate change: if there was ever a time to err on the safe side, it was long ago." - Dredd