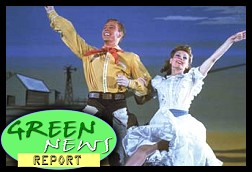 IN TODAY'S RADIO REPORT: Japan hit with monster typhoon, while Hurricane Arthur breaks a record on the US East Coast; No time for deniers: BBC smacked for false balance in climate change coverage; Voters reject climate change-denying politicians; Paltry fine for Freedom Industries poisoning drinking water in WV; Oklahoma now the nation's earthquake capitol - thanks, fracking!; PLUS: NASA's new climate eye in the sky ... All that and more in today's Green News Report!