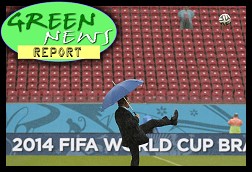 IN TODAY'S RADIO REPORT: The gloves are off - President Obama now just openly mocking climate change deniers; Pesticides linked to autism (again) and death of beneficial insects (again); Extreme weather kicks the FIFA World Cup in Brazil; PLUS: Shocker: Fox 'News' says the globe is cooling. They are wrong. (Again.)... All that and more in today's Green News Report!

IN 'GREEN NEWS EXTRA' (see links below): Is Congress lifting US crude oil export ban? No, not really.; If you think US climate politics are crazy, wait'll you see what just happened in Australia; Detroit shutting off water to thousands; Next-gen GMO crops are here and will increase use of pesticides; Doctors fail to instruct pregnant moms on toxic chemical risks; New study proves air pollution regulations save lives.... PLUS: 1 In 10 U.S. beaches too polluted for swimming ... and much, MUCH more! ...

Jon Stewart nails it again. Another great clip from one of the few commentators who actually makes sense. He has proved time and again that he can more than hold his own with the unfunny ones.