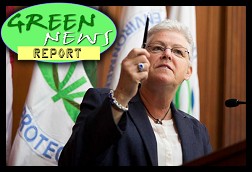 IN 'GREEN NEWS EXTRA' (see links below): Controlled burn planned after oil spill in Delta National Wildlife Refuge; Whales Saved by Ship Speed Limits; The implications of Google's self-driving car; WSJ’s shameful climate denial; Green Energy Investment Set To 'Explode'; Here’s How Much U.S. Summers Have Warmed Since 1970; IEA Report calls for huge investment in energy development; Solar Farmers in Japan to Harvest Electricity With Crops.... PLUS: Conservatives Searching for New Reasons Not to Save Planet ... and much, MUCH more! ...

« PREVIOUS STORY "'Keep Peeing in the Pool!' and Other Hilarious Responses from the Fossil Fuel-Funded 'Heartland Institute' to EPA's Proposed Emissions Standards"
» Go to The BRAD BLOG front page «
"93-Year Old Man Disenfranchised Today in Alabama for Lack of Photo ID" NEXT STORY »

Wisconsin is supposed to reduce emissions by 35%. If we are to reduce our carbon emissions to meet new the EPA standards that would probably mean that bringing any coal fired plants back online would have a negative effect on meeting EPA goals. There is a proposed iron mine in northern Wisconsin, that is getting a lot of press. There's been a bunch of arguing about its environmental effects from the acidification of the waters which will destroy the wild rice paddies at the mouth of the Bad River as well as asbestos laddened rocks that will be pulverized to extract the low grade iron ore from them, releasing a potential carcinogen to the winds. But no one has mentioned that to run this iron mine it will require a lot more CO2 pollution because of the extra electrical power.
To run the GTAC mine the mining company (whose parent is a coal company) would need to bring back several coal fired plants into use that have been shut down in the past decade or so because of the reduction of mining and other high energy interests in the northern tier of the state. Besides being a questionable venture financially, it is now less fortuitous for the Wisconsin to have to compensate for a highly polluting activity both in the water and now in the air as we are trying to meet new standards. Will the Walker administration make other parts of the state meet stricter pollution regulations so that an unpopular iron mine will start polluting our air and water? GTAC is not a good idea for the state. With the new EPA rules it is becoming even less so. Hooray for the new standards which will hopefully encourage our state decision makers that the mine is a very bad choice. The standards are not strong enough but if they stop GTAC then they will be a good start.