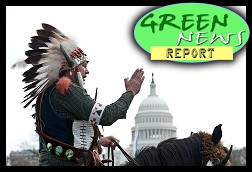 IN TODAY'S RADIO REPORT: Another fossil fuel explosion, this time in Wyoming; State Department delays as Cowboys & Indians protest the Keystone XL pipeline; Landmark $3m judgment against fracking company; Oil industry unprepared for oil spill in the Arctic; PLUS: The legacy of the BP Oil Disaster in the Gulf, four years later... All that and more in today's Green News Report!