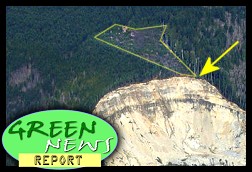 IN TODAY'S RADIO REPORT: Was logging a factor in deadly Washington landslide?; New BP oil spill in Lake Michigan; Rooftop solar endangers the electric grid? 'Bullsh*t', says former Energy Secretary; Next UN climate report warns climate change will affect 'every aspect of human life' and 'cost trillions'; PLUS: Irreversible climate change could be locked in as early 2036... All that and more in today's Green News Report!

« PREVIOUS STORY "Ukraine War Bait and E-Cigs and Dems, Oh My!: KPFK 'BradCast'"
» Go to The BRAD BLOG front page «
"Toon of the Moment: 'Build That Ark'" NEXT STORY »

The failure of Washington state officials to heed the landslide warnings is like climate change deniers in federal government failing to heed today's IPCC warnings that detain much greater impending disasters.

That was the very first thing I thought of on the very first day of the landslide, after info began to emerge that scientists had been warning about this exact catastrophe for years! (And I noted as much in last Tuesday's GNR at the top of the show, as I recall.)