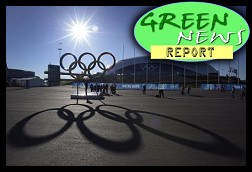 IN TODAY'S RADIO REPORT: Fossil fuels booming in the US --- literally --- with more new explosions this week; World's largest solar plant now open; Extreme winter weather again cripples the South; Extreme weather is extremely expensive and becoming more so; PLUS: Yes, climate change is coming for your Winter Olympics ... All that and more in today's Green News Report!

IN 'GREEN NEWS EXTRA' (see links below): Church of England takes on 'giant evil' of climate change; Russian environmentalist jailed; No country will take tanker ablaze and adrift in Pacific; How much to fix climate change, and how much if we don't? Abrupt climate change: the 'expected unexpected'; CA to ban sale of polluting 'microbeads' in cosmetics; FEMA won't reimburse WV for chemical spill costs ... PLUS: Fusion energy breakthrough: US scientists achieve 'turning point' ... and much, MUCH more! ...

Thanks again and again!

Here is a Think Progress piece with a graph that shows arctic ice volume going down, expressed in cubic (not square) kilometers:


Climate model projections show an Arctic-wide end-of-century temperature increase of +13° Celsius [23°F!] in late fall and +5° Celsius [9°F] in late spring if the status quo continues and current emissions increase without a mitigation scenario.
...
Obviously the Arctic will be ice free in the late summer and early fall long before century’s end. The study itself concludes, “it is very likely that the Arctic Ocean will become seasonally nearly sea ice free before 2050 and possibly within a decade or two.” How fast Greenland could melt if large parts of it were some 20°F warmer in the fall is not known, but one would have to imagine that it would be a considerably faster pace than today — leading ultimately to an ice-free Greenland, which, by itself would raise sea levels more than 20 feet.

(Arctic Autumns On Track To Warm A Staggering 23°F, NOAA Warns). Where is Davey Crockett when you need him?


Secretary of State John Kerry urged Indonesia on Sunday to take steps to combat climate change, warning that failure to act would jeopardize the nation’s resources and damage its economy.

Warming seas, he said, could deal a severe blow to Indonesia’s fishing industry, while powerful storms could buffet the country and rising seas may put much of Jakarta, the capital, under water.

“This city, this country, this region is really on the front lines of climate change,” Mr. Kerry said in a speech. “It’s not an exaggeration to say to you that your entire way of life that you live and love is at risk.”

Mr. Kerry, who has long been outspoken concerning climate change, hopes to make it a signature issue of his tenure as secretary of state.

(NY Times). I wonder if he is aware that some of the highest, if not the highest, sea level rise is happening on the coasts of the U.S. (Louisiana highest on Earth)? Of course we are glad to have some in government that get that we are endangering civilization with pollution, but let's not go around lecturing Iraq and Libya that they should not be invading other countries. You know, hypocrisy.