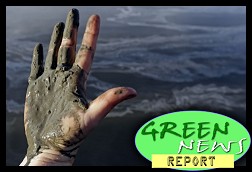 IN 'GREEN NEWS EXTRA' (see links below): Record number of billion-dollar disasters in 2013; How to deconstruct the difficult math of Keystone XL's carbon footprint; USDA launches 'climate hubs' to help farmers with drought; Winter Olympics: downhill forecast in a warming world; From Occupy to climate justice ... PLUS: Big Coal’s ash mess follows its chemical spill. Is this some kind of bad joke? ... and much, MUCH more! ...

« PREVIOUS STORY "The BRAD BLOG at 10: 'White House Website Scrubbing'"
» Go to The BRAD BLOG front page «
"Snowden on the Dangers of the 'Privatized' National Security State, in the Interview the U.S. 'News' Networks Didn't Bother to Show You" NEXT STORY »

« PREVIOUS STORY "The BRAD BLOG at 10: 'White House Website Scrubbing'"
» Go to The BRAD BLOG front page «
"Snowden on the Dangers of the 'Privatized' National Security State, in the Interview the U.S. 'News' Networks Didn't Bother to Show You" NEXT STORY »
See MSVL and support BRAD BLOG! Click here for signed premium version!