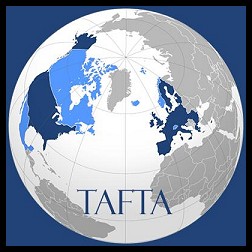 Both TAFTA and TPP would supplant U.S. sovereignty through the extreme private investor tribunal system in which the "extrajudicial tribunals would be authorized to order taxpayer compensation for public policies that European corporations claim undermine their TAFTA investor rights," according to Public Citizen.

In essence, those provisions would allow corporations to supplant the basic police powers of nation states. Instead of exercising the power to protect the health and safety of citizens and the environment in which they live, the tribunals would allow for the imposition of monetary damages that make the cost of laws that shield citizens from corporate harm prohibitive.

The following chart from the May 2013 report [PDF] of the United Nations Conference on Trade and Development illustrates how investor-state arbitrations, as filed with the International Center for Settlement of Investment Disputes (ICSID), have been on a precipitous rise since the passage of NAFTA, exploding to their highest number ever in 2012....

One classic case entailed a $250 million NAFTA investor arbitration brought by Lone Pine Resources, Inc., a Delaware-based corporation, against Canada in response to a ban on "fracking" adopted by the Province of Quebec. Despite a growing body of scientific evidence about the dangers posed by hydraulic fracturing, and a ban on the practice as democratically enacted by the people, Lone Pine described the ban in their arbitration complaint as "arbitrary, capricious and illegal."

(In a subsequent article, The BRAD BLOG will address perhaps the most blatant example of this practice, in which an ethically compromised trade tribunal has sought to supersede legal decisions now rendered against the oil giant, Chevron, by the courts of Ecuador, the United States and now Ontario, Canada).

Via TAFTA, according to Public Citizen, major corporations are not only seeking to prevent reinstatement of significant financial reforms, like the Glass-Steagall Act, but to roll back more modest reforms so as to bring back the "toxic derivatives" that played a central role in the 2008 collapse of the Wall Street casino. So called "free trade", they report, is being used as a cover for rolling back regulations on food, milk and dangerous toys, as well as to blunt the movement for the transparent labeling of Genetically Modified Organisms (GMOs). TAFTA would impose a "ban" on tax credits for alternative energy designed to reduce carbon emissions. It seeks to prevent "Buy Local" policies and to prevent governments from negotiating bulk rates on pharmaceuticals.

In sum, under the TPP and TAFTA, "free trade" provides but an Orwellian label to mask an effort to ensure that corporate profits will supplant the accountability that, theoretically, accompanies democratic governance.

I hate to be negative but I really do not think their is anything we can do to stop these trade agreements. That powers against us are to powerful.

I think the late Howard Zinn would disagree with your defeatism, Lew @1.

It is easy to be overwhelmed or intimidated by the realization that the war makers have enormous power. But some historical perspective can be useful, because it tells us that at certain points in history governments find that all their power is futile against the power of an aroused citizenry.

There is a basic weakness in governments, however massive their armies, however vast their wealth, however they control images and information, because their power depends on the obedience of citizens...When the citizens begin to suspect they have been deceived and withdraw their support, government loses its legitimacy and its power.

We have seen this happen in recent decades all around the globe. Awaking one morning to see a million angry people in the streets of the capital city, the leaders of a country begin packing their bags and calling for a helicopter.

If we the people were so powerless, why would the elites go to so much trouble concealing the content of these so-called "free trade" negotiations?