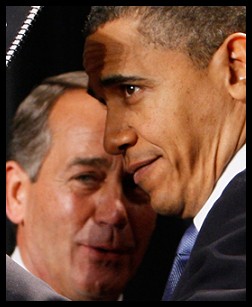 While the U.S. corporate-owned media misdirect our attention by focusing on various pretend "scandals", the Obama administration has quietly sought "fast track authority" to secretly negotiate and ram through Congress the Trans-Pacific Partnership (TPP).

The TPP is a NAFTA-like "free trade" agreement that not only threatens our national sovereignty, but aspires to supplant the sovereignty of all participating nation-states with a privately-controlled, all encompassing, corporate, global "investor state". The "investor-state" finds its embodiment in the creation of arbitration tribunals which are granted the power to negate the effectiveness of laws passed by individual nation-states.

As explained by Margaret Flowers and Kevin Zeese, through TPP, U.S. corporations and their K-Street lobbyists seek to by-pass the legislative process and democratic accountability in order to undermine Internet freedom, U.S. environmental laws and regulations and local laws protecting the health and safety of our citizenry. "Many of those corporations that have failed to get what they want from Congress are now getting their way through the secret back door of the TPP," they write. Sen. Elizabeth Warren (D-MA) has also issued a warning that Wall Street is attempting to gut Dodd-Frank through trade agreements such as TPP.

But, as government watchdog group Public Citizen observes, TPP --- which is now augmented by a joint U.S./E.U. call for a similar Transatlantic Free Trade Agreement --- threatens not only U.S. sovereignty but the ability of all nations to protect their own citizenry through the expansion of an already "notorious investor-state system". Such a system allows ethically compromised international business arbitration tribunals to compel nation-states to fork over "taxpayer-funded" penalties to predominantly U.S.-based, multinational corporations as the result of "domestic regulatory frameworks concerning nuclear energy and currency stability, revocation of mining and oil licenses (often in response to contract violations), and numerous other government measures affecting public health, financial stability, access to essential services and the environment."

What, you hadn't heard about this? Perhaps because the corporate media, and both major political parties, would prefer you keep your eyes on the shiny, pretend objects (Benghazi "scandal"! IRS "scandal"!) rather than the policies supported by both parties that will actually have a very real impact on your life and our country...

Even without the adoption of TPP, one can find a significant and growing threat to both the sovereignty of individual nation-states and to anything resembling democratic accountability in both currently existing "free trade" agreements and the World Trade Organization (WTO).

Flowers and Zeese cite two examples: 1) A WTO ruling that Ontario, Canada violated WTO rules by adopting "a renewable energy program that requires energy generators to source solar cells and wind turbines from local businesses so as to cultivate a robust supply of green goods, services and jobs." 2) A NAFTA-based suit brought by Lone Pine Resources against the Canadian government seeking $250 million in lost profits because Quebec adopted a moratorium on fracking. Flowers and Zeese add, quoting from a Huffington Post article by Sierra Club Trade Representative Ilana Sullivan:

By the end of 2011, corporations such as Chevron, Exxon Mobil, Dow Chemical, and Cargill have launched 450 investor-state cases against 89 governments, including the United States. Over $700 million has been paid to corporations under U.S. free trade agreements and bilateral investment treaties, about 70 percent of which are from challenges to natural resource and environment policies.

As illustrated by this chart, from the May 2013 report [PDF] of the United Nations Conference on Trade and Development, investor-state arbitrations, filed with the International Center for Settlement of Investment Disputes (ICSID), have been on a precipitous rise since the passage of NAFTA and have since exploded to their highest number ever in 2012....

Where Public Citizen points to a disturbing order that Ecuador pay more than $2.4 billion to Occidental Petroleum ("roughly the government's annual expenditure on health care for half the country") for its unilateral "termination of an oil contract that Occidental had violated," the truly disturbing ruling entailed a decision by a bilateral arbitration tribunal to exercise jurisdiction in a case where Chevron was attempting to block an $18 billion judgment against it for its devastating contamination of Ecuador's Amazon rainforest and the poisoning of its inhabitants --- contamination that was so extensive that it has been referred to in the documentary film, Crude: The Real Price of Oil, as the "Amazon Chernobyl."

Chevron sought to shield itself from that judgment even after the U.S. 2d Circuit Court of Appeal, in Republic of Ecuador vs. Chevron Corp., ruled that the giant oil company could not do so because the individual victims of the massive contamination --- some 30,000 indigenous members of several Amazon tribes --- were not parties to the Bilateral Investment Treaty between Ecuador and the U.S.

Chevron's efforts to use U.S. courts to block the $18 billion Ecuador judgment ultimately ended when the U.S. Supreme Court summarily denied its petition for a writ of certiorari.

Public Citizen has mixed the good news with the bad. A growing number of countries are rising to the occasion:

Australia has already refused to sign on to any investor-state provisions. Other countries may follow their lead. In the meantime, global resistance to the extreme investor-state system is growing, with countries like Brazil, India, South Africa, and Ecuador rejecting its threats to democratic policymaking in the public interest.

To be truly effective, that resistance must be joined by democratic forces within the United States, which serves as the heart of the global corporate empire. Instead of TPP, our nation would be better served to move in the opposite direction, repealing NAFTA-like "free trade" agreements and replacing them with fair trade agreements that respect human rights to a livable wage and a sustainable environment. It was a goal that was embodied in The Trade, Reform, Accountability, Development and Employment (TRADE) Act, as introduced in both the 110th and 111th Congress. TRADE had 148 co-sponsors in the House and 9 in the Senate but was never allowed to come up for a vote after being bottled-up in committees in both chambers. TRADE failed to receive an up-or-down vote despite polls showing that the American people favor fair trade over the chimera of so-called "free trade".


* * *
Ernest A. Canning has been an active member of the California state bar since 1977. Mr. Canning has received both undergraduate and graduate degrees in political science as well as a juris doctor. He is also a Vietnam vet (4th Infantry, Central Highlands 1968). Follow him on Twitter: @Cann4ing.
Tweet
Reader comments follow below ad...

« PREVIOUS STORY "Another Case of OH Voter Fraud that Would Not Have Been Deterred by GOP Photo ID Restrictions"
» Go to The BRAD BLOG front page «
"'Green News Report' - May 30, 2013" NEXT STORY »

Tell everyone you know. This back-door coup will only work if they can keep it quiet. Our criminals in Congress won't hesitate to take themselves from mostly irrelevant to completely irrelevant.

don't want you piece of shti greentards to vote on anything until you actually understand physics and electronics. Till then, hasta la vista

So keep voting communist you turd. Apathy will indeed fulfill the prophecy of the Georgia Guide-stones. And the UN A21

Can we just ban this asshole? He contributes nothing worthwhile and he's breaking one of the few rules here. There are plenty of other places he can spew.

Oh, I don't know, David Lasagna, at least Phil's testy mumblings are good for a laugh.

After all, no one at The BRAD BLOG would have had any idea about the level of Phil's ignorance until he actually began to write and post his worthless comments.

I find Phil's postings here incoherent. At least some posting contrary viewpoints can put a sentence together.

Adding to my comment @6, David, you know you're in for a good laugh by someone like Phil, who revealed @2 that he can't spell "shit."

It explains a lot about the perplexing politics that seem so un-American.

A university study shows that 147 international corporations (incestuously owning all or part of each other) own about half of all the worlds wealth.

That money is talking and U.S. two-party politics (BS) is walking.

These corps. are the perps behind these trade treaties and other plutocratic dynamics.

They are not even afraid to come out from their hiding places now, which is troublesome (Epigovernment: The New Model).

Let's hang together so we don't hang individually.

All around the mulberry bush the monkey chased the WEASLE

« PREVIOUS STORY "Another Case of OH Voter Fraud that Would Not Have Been Deterred by GOP Photo ID Restrictions"
» Go to The BRAD BLOG front page «
"'Green News Report' - May 30, 2013" NEXT STORY »
See MSVL and support BRAD BLOG! Click here for signed premium version!