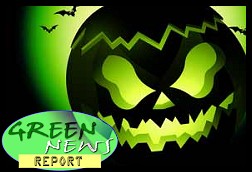 « PREVIOUS STORY "KPFK 'BradCast': The Photo ID 'Posner Coaster' and Other New Fronts in the GOP War on Voting"
» Go to The BRAD BLOG front page «
"They Just Can't Drive 55 (Without Section 5)" NEXT STORY »

One has to wonder, why then, have four climate scientists, including James Hansen, written a letter saying we have to use nuclear? (Why Not "Clean Coal" or "Safe Nuclear"?)