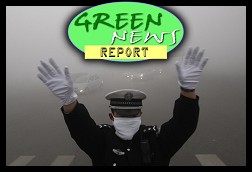 IN TODAY'S RADIO REPORT: China choking on toxic air; Air pollution causing lung cancer everywhere; Anti-fracking protests spread across Europe...and turn violent in Canada, while France holds the line; PLUS: Some good news: US carbon emissions falling for the 5th year in a row ... All that and more in today's Green News Report!

When my wife and I were flying into Beijing in 2008, I looked out my window and saw this huge black cloud. The steward laughed when I asked if it was fog. Despite having lived in So Cal most of my life, I really didn't have an idea of the meaning of a traffic jam or gridlock until I spent time on a Beijing freeway, watching emergency vehicles go nowhere even when their red lights were flashing.

We were driven past the same university in Xian where Al Gore had met with a Chinese professor during the filming of An Inconvenient Truth. The air quality was substantially similar to the photo at the beginning of this article. Drawing a deep breath was painful.

While the air in Shanghai was relatively clean thanks to energy produced by the nearby Three Gorges Dam and natural gas driven vehicles, during our trip towards Shanghai on the Yangtze river, all we saw was one coal barge after another.

"The ocean is broken" does not bode well for the food supply.