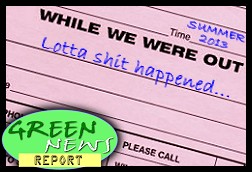 IN 'GREEN NEWS EXTRA' (see links below): What Al Jazeera America didn't say about climate change; Germany breaks its own solar record; MSM's ambivalent coverage of climate change’s ‘new normal’; Battle over global warming is all in your head; Why so many conservatives deny climate sciece [they hate the solution]; Why US power grid's days are numbered; All US nuclear reactors vulnerable to terrorists; Mosquitos are worse this summer ... PLUS: Might as well face it, you’re addicted to oil (an intervention) ... and much, MUCH more! ...

Brad and Desi:
For the past 40+ years we have seen energy companies (especially on PBS programming, but also on regular commercial TV) tell us about what they were doing either for the current times or what they planned for the future. I remember that the oil companies used to promise that there was enough oil-shale in the ground to supply petroleum products in a safe and economical way for the US (not anyone else) for over 100 years. Now it seems we are getting those petroleum products through fracking.
In the ads from way-back-when they did not talk about the negative sides of the future energy supplies, only that we had a domestic supply that would power us for the foreseeable future (and would be clean burning if it was a natural gas energy source).
I was wondering if the Green News Report would be able to do some investigating of the energy company ads over the past 50 years. What were the promises, and what were the realities of what they said. I pose this because I think the general public has a relative sense of trust in the oil companies (that is wavering from recent events) because of the old ad campaigns, and their feel good, we're looking out for your future feeling. I would like someone to debunk the years of false promises and undermine the positive feelings that the companies have engendered by a good dose of reality of what they really have done instead. Is this possible?

Interesting thought, Alex. I would add that the NEW ads are as insidious if not more so, and seem to blanket the airwaves in ways the old school stuff never came close to. (Just look how ExxonMobil, ANGA, BP, etc. are all "looking out for our future" in virtually every single ad break on every single cable news channels (and as underwriters on "public" television stations, etc.)

Such a report, as you describe it, would be no small project, in fact. And it'd certainly be more than we'd be able to adequately cover in a 6-minute radio report (not to mention the lack of resources we have for such long form reportage.) But it's not something I'd be opposed to covering in some sense, in some way, on The BRAD BLOG proper, with coverage on GNR then pointing to the full report here.

But, again, it's a matter of extremely limited resources in every way (largely money, certainly time, since we cover so much else at the same time.) Could be an interesting crowd-source project, however.

Have you taken any time to go searching on YouTube, etc. for those ads? Old and/or new? Beginning to collect them into one place would be one helpful way to start looking at what was/is wasn't/isn't there, both available and whether it's along the lines you suggest (as you remember them.)

Nice report kids!!! Always carry bear pepper spray when you're out in the sticks especially in grizz country.

" ... I think the general public has a relative sense of trust in the oil companies ..."

Actually, there is evidence that the oil and gas industry is the most hated industry in America (Huffingtngto Post, The 10 Most Hated Industries In America). For good reason, they are Oil-Qaeda.

Oil company "popularity" may take even more of a hit with reported pricing fraud alleged (Huffington Post). Price fixing is alleged. DOJ task force is supposedly looking at it.