On today's BradCast: The Trump Administration imperils the lives and futures of nearly one million "Dreamers", as heat and fire burn up the West, flood waters continue to ravage Texas and Louisiana, Congress returns to an impossible schedule, war concerns remain on the Korean Peninsula and now a record shattering new hurricane is gunning for Florida. [Audio link to show follows below.]

In addition to still-mounting death toll from the Hurricane Harvey disaster in Texas and Louisiana, the holiday weekend brought a bevy of disturbing news, including a major new nuclear test (possibly a hydrogen bomb) in North Korea, threats by Donald Trump to end a trade deal with our allies in South Korea (for some reason), and record wildfires and heat up and down the Western U.S., including here in Los Angeles.

All of that, however, may pale in comparison to what could be in store over the next several days, as Hurricane Irma, a record Category 5 storm, threatens Caribbean nations in the Atlantic, and could grow even more intense over the next several days with a trajectory toward south Florida, where record warm waters could place us all even further into uncharted climate territory than we are already.

That's just some of the news as Congress returns to session this week with a virtually unprecedented calendar of "must-pass" bills by the end of the month to avoid government shutdown and default.

And, it is into that mix that Donald Trump decided on Tuesday to have his Attorney General Jeff Sessions announce the Administration is ending the Deferred Action for Childhood Arrivals (DACA) program instituted by President Obama. The much-derided new policy threatens some 800,000 children of undocumented immigrants, brought to the U.S. by their parents through no fault of their own, many of whom have never known any other country.

Salon's award-winning columnist and blogger HEATHER 'DIGBY' PARTON joins us today to discuss what Trump's cruel new policy will mean and whether our already-dysfunctional Congress may finally be able to pass legislation in the next six months to allow those "Dreamers" who came out of the shadows under the previous Administration to avoid deportation by this one.

"This is going to be seen as an historic day," Parton argues. "It's one thing to let things kind of slide, [Trump's] nasty rhetoric, and say he's kind of a showman, he's somebody who has activated the racist, bigoted, xenophobic id of White America because they have all these anxieties and he's sort of exploiting that --- that is real. This is a real thing that they are doing potentially to close to a million people. This is a million people, all over the United States, deeply embedded into our economy, into our culture, into our communities."

"The fact that they were brought here with no say in it, and had absolutely no control over what was happening to them, they're going to have to pay for that decision by their parents. It's really, really ugly," she explains. "Since Trump took office, we've seen that picture of the Statue of Liberty crying, many many times. This is the day when it really comes home. The Emma Lazarus poem that's on the bottom of there says everything, and Trump has just basically defaced it."

Trump had previously claimed he would "deal with DACA with heart." Parton, citing Sessions making the announcement on Tuesday (not Trump) and the now desperate need for Congress to clean up this new mess somehow before six months is out, tells me: "'Cowardice' is the way to put it, not 'heart'"

She also has a controversial thought or two on whether Democrats in Congress ought to make a deal with Republicans in exchange for funding Trump's border wall with Mexico in order to circumvent the unspeakably inhumane course of events that could transpire now that the President has decided to overturn DACA... 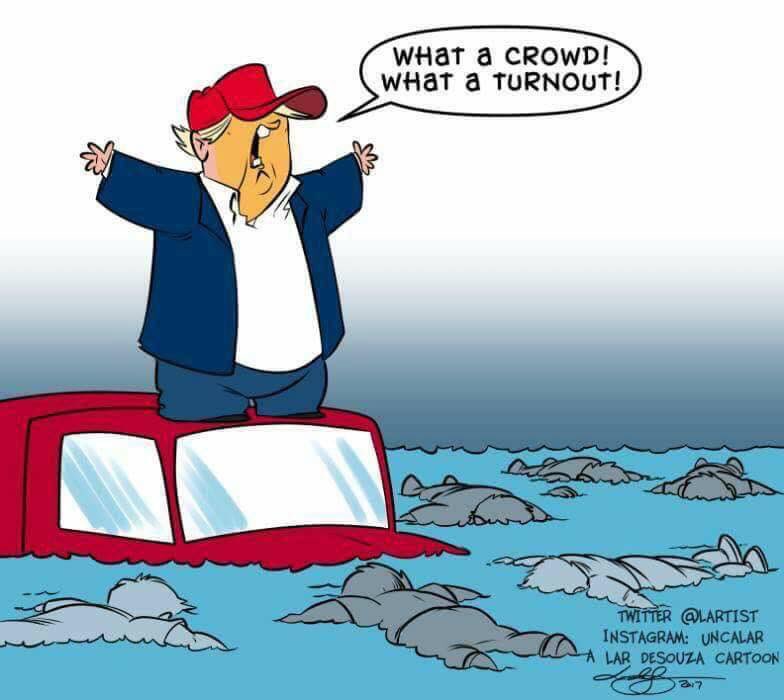 Comments Off
Article Categories: Toons
We Interrupt Your Labor Day Picnic with News About Labor: 'BradCast' 9/1/2017
Guest Host Angie Coiro w/ Sarah Jaffe on Labor; James Forman Jr, 'Locking Up Our Own' and Charlottesville...
By Angie Coiro on 9/1/2017 5:07pm PT

On today's BradCast, guest hosted by me, Angie Coiro of In Deep, we start out with a round-up of headlines. Among the fun:

Two more cases of police brutality; one cop already off scot-free, a second apparently a law unto himself.

Then - appropriate to the season - we spend time with Sarah Jaffe, author of Necessary Trouble: Americans in Revolt. She's got an all-encompassing update on labor issues around the US. Surprise: organized labor is at least as popular as our "president"! The paperback edition of her book is out in November.

Finally, excerpts from an hour long conversation with James Forman, Jr., author of Locking Up Our Own: Crime and Punishment in Black America. We touch on black Americans' influence on the justice system, Charlottesville, the Confederate flag, and of course Trump.