As things have gotten even worse over the last day or two since our detailed Tuesday night report on the mess in Wisconsin's Supreme Court election "recount" (we hope to have an updated report with the new news there later today), progressive Wisconsin blogger Patrick DePula of "Dispatches from Fitzwalkerstan" reports today that the fight for recall elections of both Republican and Democratic state senators has gotten particularly ugly with Democrats now prepared to file "formal complaints" charging massive "election fraud" (more appropriately "petition fraud"?) by the Republican Party...

As if the Wisconsin Supreme Court Justice “recount” isn’t a big enough mess, It appears that the Wisconsin GOP has been engaged in widespread fraud surrounding their attempts to recall democratic senators. Inexplicably, the Republican Party of Wisconsin had relied heavily on people they hired from out of state to collect signatures against democrats, even paying to house these folks in hotel rooms. In all cases, they paid by the signature. Sounds like a recipe for disaster, right? The decision to pay out of state people when there are plenty of unemployed folks that reside in those senate districts who may actually be invested in the outcome of these recall elections makes no sense at all.

But the story gets even better.... 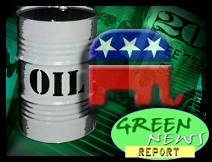 IN TODAY'S RADIO REPORT: Showdown over Big Oil subsidies; A new pipeline --- and a new pipeline spill --- in Canada; Open season on endangered wolves ... PLUS: Estimates for sea level rise may be wrong --- really wrong ... All that and more in today's Green News Report!

IN 'GREEN NEWS EXTRA' (see links below): Another wake-up call to ignore: Ogallalla Aquifer’s depletion poses sweeping threat to US; Automakers promote hydrogen cars; Water Shortages Threaten Food Future in the Middle East; Last-minute tips for a greener Cinco de Mayo; The US evangelicals who believe environmentalism is a 'native evil'; Mercury levels are rising in Arctic animals; Plan to phase out the $5 billion in ag subsidies; Iowa soil washing away at rates far higher than expected; 400meter-wide rock will pass Earth in Nov.; Why one 16-year-old is suing the US government over climate change; The science of why we don't believe Science ... PLUS: How to profit from the coming ecopocalypse ...

Wisconsin is no Minnesota.

Where Minnesota's post-election hand count of the 2008 U.S. Senate election between then Sen. Norm Coleman and now Sen. Al Franken was, as we wrote at the UK's Guardian at the time, "one of the longest and most transparent election hand-counts in the history of the US," Wisconsin has made it extremely difficult (putting it nicely) to know what the hell is actually going on in their statewide "recount" of the April 5th, 2011, state Supreme Court election between Justice David Prosser and Asst. Attorney General JoAnne Kloppenburg.

Where Minnesota's chief election official, Sec. of State Mark Ritchie, oversaw a process to ensure that updated and accurate numbers were easily tracked and transparently shared with the media on a daily basis, Wisconsin's chief election authority, their Government Accountability Board (G.A.B.), has posted (and even sometimes removed) confusing, misleading, and unclear updates, often with inaccurate information, on various schedules, and frequently with little or no explanation for wholesale changes and deletion of data.

Where Minnesota counted every vote by hand with full public scrutiny, including photographs and video cameras, Wisconsin is tabulating ballots, often by the same oft-failed, easily-manipulated computer systems that counted them in the first place, behind barriers that preclude broad public oversight, under an agreement between both campaigns which disallows the use of video cameras by observers.

The count, which began last Wednesday, often feels as if it's happening in virtual darkness, at least to those of us trying to observe from afar, but the same sentiment has been shared with us by many we've spoken to who are there on the ground. There is an alarming lack of transparency to help the citizenry oversee the process in order to ensure accountability and an accurate count. To make matters worse, if that's possible, chain of custody issues for the ballots appear questionable in a number of reported cases, after ballots have been kept in the same darkness by election officials --- sometimes securely, sometimes not --- for the three weeks following the election and prior to the "recount."

One person we've spoken to who has also been trying desperately, as we have, to closely follow along with the progress, described the situation over the weekend by saying: "Let's call it 'fascinatingly unacceptable.' There are other 'f' words I could use, but we'll leave it at that."

Another Election Integrity veteran was forced to reach for a "bright side" by saying: "It may be worse than Minnesota, but, hey, at least it's no Florida!"

We've not written here about WI's Supreme Court "recount" since it began last Wednesday, largely because we've had such a difficult time making heads or tails of the progress, the accuracy, the integrity of the ballots or the counting, or even of the various reports of bizarre anomalies which continue to occur, often with little explanation for their resolution... 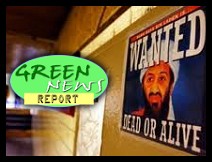 Reportedly a photo of President Obama and his national security team watching the U.S. Special Forces operation to capture/kill Osama bin Laden, live yesterday in Abbottabad, Pakistan. The photo is described this way on the White House Flickr stream...

President Barack Obama and Vice President Joe Biden, along with members of the national security team, receive an update on the mission against Osama bin Laden in the Situation Room of the White House, May 1, 2011. Please note: a classified document seen in this photograph has been obscured. (Official White House Photo by Pete Souza)

UPDATE 7:34pm PT: More details on what was going on in that room during that picture from CBS News.

New York Times, CNN, NBC, Fox "News" are all now reporting that Osama Bin Laden has been killed. CNN reports three sources have confirmed, and that the U.S. has his body and have matched it with DNA evidence.

CNN reports: "Al Qaeda leader Osama bin Laden was killed by U.S. forces in a mansion outside the Pakistani capital of Islamabad along with other family members, a senior U.S. official tells CNN."

The White House has called back the press pool to make the dramatic announcement shortly. Crowds outside the the north lawn of the White House are now gathering and cheering, as we sill await the president's official announcement...

In live televised statement to the nation, the president says Bin Laden was killed today in Abbottabad, Pakistan after actionable intelligence led him to order an attack by the U.S. military. A fire fight ensued, though no U.S. forces were killed.

He added that the effort, ten years after the 9/11 attacks, comes as a result of one of his first acts in office two years ago, ordering that the capture or killing of the al-Qaeda leader would be the nation's top priority in the "War on Terror."

"Justice has been done," said the President...

Whatever you may think about this President, he knows how to tell a pretty good joke, especially at his own expense. He delivered again last night --- along with showing some pretty funny 'birther' videos --- at this year's White House Correspondents' Dinner (or "Nerd Prom", as it's also known, though mostly only among those uninvited in the blogosphere)...

Perhaps of most note among the jokes Obama told at the expense of his potential 2012 GOP Presidential rivals, was the lack of any reference to the once-famous Sarah Palin (who was also in attendance last night.)

Similarly, in the headline set by Saturday Night Live's Seth Meyers following the President's remarks, jokes about Palin were also conspicuous by their absence. On the other hand, jokes at the expense of Donald Trump, who was in the audience as well, were plentiful in both speeches, and particularly pointed during Meyers' routine. As RAW STORY's David Ferguson observed, The Donald seemed particularly unamused during Meyers' slams, though his "grim, frozen scowl throughout just adds to the viewing pleasure."

The video of Meyers headline remarks follows below...