If you needed any further proof that the American government doesn't give a damn about its soldiers, here's a story to make you cry ... again! It looks like our Justice Department has fallen so deeply in love with torture, that in their view, it's not only OK for our guys to torture their guys, but it's also OK for their guys to torture our guys!

I quote the following passages from an article written by John Norton Moore, published by Slate, and headlined: Abuse of Trust: The POW scandal you haven't yet heard about.

This nation has a special responsibility to prevent the torture of Americans held as prisoners of war. Our POWs have been brutally tortured at command direction in war after war, including the Korean, Vietnam, and most recently, the Gulf War; and it's clear that we need to do whatever we can to break this pattern. Yet when 17 of our tortured Gulf War POWs and 37 of their family members said "enough" and joined together to bring a historic civil action to hold their Iraqi torturers liable, they were shocked — having won their case in federal court — to find the Department of Justice seeking to erase their judgment and "absolve" their torturers.

Moore details the horrific treatment suffered by Americans who were held prisoner in Iraq during George Herbert Walker Bush's 'excellent Iraqi adventure', and describes their efforts to hold the Iraqi government accountable. These efforts culminated in a lawsuit against the Iraqi government, which the POWs won. But then something very strange happened...

Historically the United States has been a world leader in seeking to prevent torture. Today, along with most nations, it is bound by the Third Geneva Convention for the Protection of POWs. That convention bans all torture and inhumane treatment of POWs and, as a core enforcement mechanism, provides in Article 131 that no state may "absolve" a torturing state of "any liability" for their torture. This provision is particularly aimed at holding the state itself liable and banning any removal of that liability at the conclusion of a war.

Sadly, along came the Abu Ghraib scandal, setting aside this historic tradition and the professional judgment of our military JAG officers and State Department experts. As is now well known, one effect of the abuse scandal was to undermine deterrence against the torture of American POWs in future wars (this, along with its catastrophic political cost to the Iraq war effort and, more broadly, to our nation's reputation). But, in a perfect storm of bad news for future American POWs, while the now infamous abuse decisions were still policy, the Justice Department went into court to erase the POWs' judgment and its message of liability for torture.

This incredible situation may be reversed on appeal, if the Supreme Court decides to hear the case, and if it rules in favor of the POWs. But what is the likelihood of the Supreme Court ruling against the Justice Department? And...

If the [...] decision stands [...], the consequences will be catastrophic. Future tyrants will hear the message, like a fire bell in the night, that the United States has little concern for its own POWs. Morale will decline in our armed forces as the reality sinks in that our government has sided with their torturers over them. A core enforcement mechanism of the POW convention, as well as our reliability as a treaty partner, will be undermined by our remarkable decision to "absolve" a torturing state in violation of the convention.

Oh yeah! Freedom and Liberty are definitely On The March ... in the Land of the Formerly Free, and the Home of the Utterly Depraved!

( 25 so far... )
Article Categories: (Uncategorized)
The Best Writers On The Internet
Always read the stories these people write
By Winter Patriot on 1/25/2005 7:58am PT

Looking for something to read? Here's a great place to start: John Kaminski's newest piece at Serendipity, "The Ten Best Writers On The Internet".

Kaminski is a bit of a wild man, and I mean that in the best possible way. He digs deep, and writes passionate prose. He is beholden to nobody, and he always says exactly what he thinks. [Does that remind you of anyone? Somebody who's on his way to Utah, perhaps?]

As you will see when you read the article, Kaminski intended to list just ten writers, but he couldn't stick to that arbitrary limit. Instead, he's provided short introductions (and links) to twenty-five of his favorites.

You may find some familiar names here. You will probably find some new names as well. Some of my favorite writers didn't even make the list. Tough list! Greg Palast isn't on it. Neither is Brad. Neither is Freebird. Oh well. What are you gonna do?

Maybe someday I will write a piece about my favorite writers who are not on Kaminski's list. Maybe someday I will start an open thread where I ask you to do the same. But in the meantime, here's a way to get us all started on the same page (as it were)...

Please bookmark this page. Open it whenever you have nothing else to do. Familiarize yourself with the names, and explore the links. Then come back here and let us know what you think.

Knowing his support amongst Cuban Americans in the battleground state of Florida is slipping, George W. Bush went stumping in Miami today. Like a broken record, Mr. Bush accused John Kerry of flip flopping in his vote against the Helms-Burton law. Kerry had actually voted for two earlier versions of the bill and eventually voted against the final passage due to provisions he did not like in the final draft. Simple to understand. Something a Senator does all the time. But Mr. Bush wanted to highlight his point to his captive audience and added this nugget of insight:

To clear things up, his campaign said that while he did vote against final passages, he had voted for it more earlier.

Seeing his numbers drop from 88 percent support to the mid sixties among Cuban-American voters in Florida, he pulled the old bait and switch by addressing not what the people are so upset about (travel and spending restrictions) but by aggressively attacking Kerry's Flip Flops. Besides failing English, Bush seemingly has failed history as his unwavering stance on the travel ban proves. 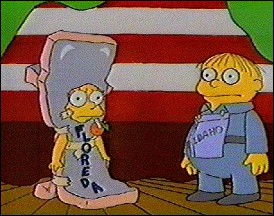 The embargo didn't work with Kennedy...or Johnson...or Nixon...or Ford...or Carter...or Reagan...or Daddy...or Clinton...or 3 years into Dubya's term. By heeding the advice of dusting himself off and getting back on the saddle, Bush's election year embargo frenzy is seemingly backfiring. The embargo has outlasted president after president. It never worked and it won't ever work.

What America, and the Cuban-American families, need is a more better policy that should have been enacted more earlier. One that overwhelms Cuba with capital not deprive it of State-side assistance. Unfortunately, in the Bush administration consistency trumps accuracy and the once solid dissident base in Florida will more likely vote no' on Bush rather than Si.