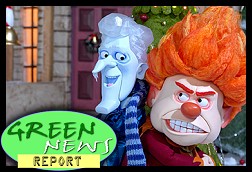 IN TODAY'S RADIO REPORT: Weather Whiplash: record May snowstorm in Minnesota, early May wildfires in California; Who paid for last year's billion-dollar record crop disaster? YOU did; Myth-busting: 40th anniversary of Newsweek's "coming ice age" blunder; PLUS: Surprise! Fox 'News' lies about the term 'climate change' ... All that and more in today's Green News Report!

IN 'GREEN NEWS EXTRA' (see links below): What would 'wartime mobilization' to fight climate change look like?; You Won't Believe What's in Your Turkey Burger; Most Americans clueless about global scientific consensus on climate change;
Billionaire Koch Bros attack renewable energy standards in the states & launch new front group; Oslo runs out of garbage, imports it from rest of the world; Climate Change: Top Investors Will Feel Heat of New Epoch ... PLUS: Unburnable Fuel: Either governments are not serious about climate change or fossil-fuel firms are overvalued ... and much, MUCH more! ...

Just breaking (besides US weather and temperature records) - It was discovered that the wacky Newsweek Heat Miser in the 70's who had giving props to the Snow Miser's world climate view prediction theories (now a contributing anchor at Faux) have been working in cahoots. Finally the truth is un-covered

Turns out that these 2 Misers are actually imposters in real life and completely different people inside their costumes posing as our cartoon friends with a completely alternate agenda than their story floated in the mainstream media.

Using the secret code name: OPERATION DEEP POCKETS, these propaganda deceptionists have been at it a long time periodically turning up the heat with their.... Deep Pockets.

If I was to finger someone in the dark or should I say to just give these bastards the finger in the light, I would have to conclude that it's most likely funded by card carrying members of the Fossil Fuel CEO/Billionaire's Club.

Today the sky above is momentarily clear. Taking a closer look, it can easily be determined that this is the work of the Keystone climate ANTI-cops in Koch-less panties in concert with the best soul-less political criminals money can buy.

Brad:
I liked the music combination at the end of the Green News Report, but I think "Burning Down The House" by Talking Heads would have been better than "Hot Hot Hot" by Buster Poindexter considering we have wildfires.

Did Bush condemn my kids to the greenhouse gas ovens?
Climate Change believers were fear mongering bullies who threatened our children like neocons and condemning billions to an exaggerated crisis will be seen as a war crime in the history books.
Science said asteroid hits were real and “inevitable” but science had never said climate change was as real as an asteroid hit is through 28 years of “research”.
The exaggeration was obvious to the former believer majority.
*Occupywallstreet does not even mention CO2 in its list of demands because of the bank-funded and corporate run carbon trading stock markets ruled by corporations.

Yeah, that is the ticket.

They subverted the Admiral in charge of the Pacific, an Admiral in the Pentagon, and the Supreme Court because All Weather is Local.