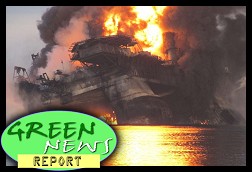 IN TODAY'S RADIO REPORT: They'd like to get their lives back: 3rd anniversary of BP's Oil Disaster in the Gulf; EPA victory over mountaintop removal coal mining; EPA slams State Dept's Keystone XL report; PLUS: Free at last: environmental activist Tim de Christopher freed - on Earth Day ... All that and more in today's Green News Report!

The government continues to act sicko by sending big bucks to rebels while impeding or cutting jobs of hurricane watchers and dangerous weather watchers (The Common Good - 6).