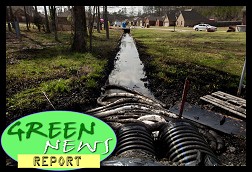 IN TODAY'S RADIO REPORT: Disturbing updates on the Exxon tar sands oil pipeline spill in AR; Majority of Republicans believe global warming a 'hoax'; 'Tsunami of rain' in Argentina; China cheating on fish catches?; Golf in the Arctic? PLUS: 'Monsanto Protection Act' - Sneaky legislation exempts GMOs from the law... All that and more in today's Green News Report!