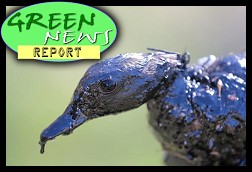 IN TODAY'S RADIO REPORT: Will major tar sands pipeline spill in AR doom Keystone XL?; How about the spills in WI, MN, UT?; NASA's Dr. James Hansen steps down to step up activism; SCOTUS smacks down Big Oil lawsuit; PLUS: Score one for breathers: EPA's new rules cut deadly air pollution - but Republicans are against it ... All that and more in today's Green News Report!

Hey Brad and Desi - Thanx for another great informative GNR!! You all are a good model of how investigative enviro news reporters should be. 2 people with a 'tude who care.

At the same time the oil pipeline leaked, there was a nuclear power plant accident near by:


Some details have been released in the Nuclear Regulation Commission's investigation of a deadly accident at Arkansas Nuclear One.

Federal investigators say the accident happened during an attempt to move a five-hundred ton piece of equipment called a main turbine generator stator.

Equipment being used in the operation failed, killing one worker and injuring three others.

The failure also caused a "breaker explosion in the protected area."

The report does not indicate exactly what the breaker explosion was or what caused it, and goes on to say the full extent of structural damage on Unit 1 is still unknown.

Investigation into the cause of the failure and extent of damage continues.

More seal pups in California have already died in 2013 than in the previous 5 years (link), and there has been a 28% increase in infants born with Thyroid problems (link).

Thanks, too, Dredd --- it'll be interesting to see what really happened at the nuke plant, and also IF the NRC decides to reveal it.