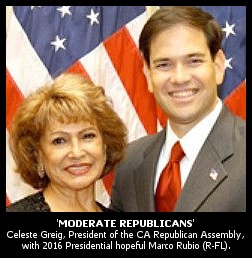 Celeste Greig, the head of the California Republican Assembly, recently demonstrated that ignorance about female biology is not limited to Republican men.

But then, that should not come as a surprise. Ignorance, like intelligence, is not gender specific. Whether we deal with global climate change, so-called "intelligent design" or the mistaken belief that rape-related pregnancies are rare, the modern GOP has demonstrated that they are unwilling to let a little thing like science stand in the way of their political agenda.

For the anti-abortion crowd, the notion that rape pregnancies are rare entails what The Atlantic's Garance Franke-Ruta aptly described as the "canard that will not die." As she notes, the truth, according to the American Journal of Obstetrics and Gynecology, is that "among adult women an estimated 32,101 pregnancies result from rape each year." Hardly a "rare" occurrence.

The issue, of course, became a central focus of the 2012 U.S. Senate campaign in Missouri when Rep. Todd Akin (R-MO) advanced the idiotic notion that women are rarely impregnated during a "legitimate rape" because "the female body has ways to shut that whole thing down." The idiocy was resurrected by Greig, who on Friday, March 1, after admonishing Akin for his insensitivity, said "the percentage of pregnancies due to rape is small because it's an act of violence, because the body is traumatized."

Unfortunately, Akin wasn't the first to forward the anti-choice ruse, and Grieg, undoubtedly, will not be the last among those seeking to outlaw the right to abortion, even if it requires lying to the American public about scientific facts...

The canard began with the March 1988 claim made by Pennsylvania State Representative Stephen Freind (R) that pregnancies from rape were "one in millions and millions" --- a claim which Freind, himself, admitted was "an exaggeration," though he claimed that studies revealed that during the trauma of rape, "a woman secrets a certain secretion, which has the tendency to kill sperm."

There was, of course, no scientific validity to Freind's claim. To the contrary, the 1996 study by the American Journal of Obstetrics and Gynecology found: "Rape-related pregnancy occurs with significant frequency. It is a cause of many unwanted pregnancies and is closely linked with family and domestic violence." The study suggested an increased focus on "preventing and identifying unwanted pregnancies that result from sexual victimization."

Medical experts like Richard Depp, M.D., Chairman of Obstetrics and Gynecology at Thomas Jefferson University and Luigi Mastroianni, Jr., M.D., the Director of the Division of Human Reproduction at the Hospital of the University of Pennsylvania, were quick to dismiss Freind's rant at the time as "scientifically unfounded" and "nonsense." Mastroianni, who is a past president of the American Fertility Society, quipped: "Boy, if I could find out what that [secretion] was, I'd use it as a contraceptive."

When it comes to rape, Dr. Fay Boozman, (R-AR) proved that the ability to ignore science was not limited to lay Republicans. Boozman was a right-wing Christian, a candidate for the U.S. Senate in 1998 and an ophthalmologist. He was appointed by Gov. Mike Huckabee (R-AR) to serve on a medical advisory board for a crisis pregnancy center. Boozman claimed that "fear-induced hormonal changes could block a rape victim's ability to conceive."

Although he later acknowledged that the remark was based on his "personal observations" and not on the basis of any scientific study, Boozman, refused to retract it, though he did apologize to "the women and young ladies of Arkansas" for "any hurt" his remark may have caused.

Boozman was handily defeated in the 1998 U.S. Senate race by Democrat Blanche Lincoln (though he would have his revenge over a decade later, in 2010, when he would eventually unseat her during that year's GOP wave election.)

Not to be outdone by Boozman, John C. Wilke, M.D., a general practitioner and the president of National Right to Life, followed up with a 1999 essay, Rape Pregnancies are Rare, in which he advanced the notion that "assault rape" rarely led to pregnancies. He claimed, without citing a single scientific study, that a rape victim's fallopian tube contracts secondary to fear and trauma, making fertilization less likely.

Wilke's claim was described by Michael Greene, M.D., Prof. of Obstetrics, Gynecology and Reproductive Biology at Harvard Medical School as "just nuts." David Grimes, M.D., a Clinical Professor of Obstetrics and Gynecology at the University of North Carolina, who was formerly associated with the Centers for Disease Control and Prevention, stated that Wilke's fallopian tube contraction theory was "nonsense. Everything is working. The tube is very small anyway and sperm are very tiny --- they're excellent swimmers."

Scientific refutation, of course, did not dissuade Akin's idiotic "legitimate rape" comment, and it failed to dissuade Greig's, even as she was initially attempting to condemn it --- before she went ahead and asserted it for herself. For fanatic "right-to-lifers," rape pregnancies are an inconvenient truth.

« PREVIOUS STORY "RAGING BULL: Radical Activist Jurist Antonin Scalia, Legislating from the Bench"
» Go to The BRAD BLOG front page «
"Chart of the Moment: What Republicans Hope You Don't Notice About Our 'Debt Problem'" NEXT STORY »

READER COMMENTS ON
"Canard About 'Rarity' of Rape Pregnancy: GOP Just Can't Seem to 'Shut That Whole Thing Down'"
(2 Responses so far...)

Keep talking about rape GOP, that's been working really well for you...

The sooner the GOP dumps these buffoons the sooner we can get to solving real problems.

The delusions and rewriting of history continues with the Conservative mindset.
If this pregnancy prevention was possible, then why did the Mongols, the Vikings and other marauding and pillaging invaders use rape as part of their conquering of foes?
Because it gave them a progeny in their new lands so that their genetics would be carried on. Yes it was for fear and power (as well as sexual release), but also for spreading their seed.
Why do people of eastern Europe and central Asia have more of an oriental appearance than western Europeans? The Mongols didn't just bring a love of silk to the west.
There would be far fewer people on this earth if rape did not produce offspring.
Is this "rape doesn't make babies" excuse for southerners to deny that they have any relatives who have black ancestry? Then they can rationalize that all their ancestors seduced or had loving relationships with ther slaves.