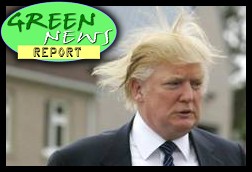 IN TODAY'S RADIO REPORT: Superstorm Sandy disaster aid finally passed by Congress; Transportation Secretary to step down; Catastrophic flooding in Australia, while drought worsens in US; Poll: climate action a winner with voters; PLUS: Who in New York is paying to protest wind farms in Scotland? ... All that and more in today's Green News Report!

Plus, Al Gore is FAT therefore global warming is a hoax.

Thanx for another informative GNR kids and hope you all have another 10 years of outstanding independent investigative blogging!

Pabulum is not for Dr. Box:


Box also provided a large-scale perspective on how much sea level rise humanity has already probably set in motion from the burning of fossil fuels. The answer is staggering: 69 feet, including water from both Greenland and Antarctica, as well as other glaciers based on land from around the world.

Scientists like Box aren't sure precisely when, or how fast, all that water will flow into the seas. They only know that in past periods of Earth's history, levels of atmospheric greenhouse gases and sea levels have followed one another closely, allowing an inference about where sea level is headed as it, in effect, catches up with the greenhouse gases we've unleashed. To be sure, the process will play out over vast time periods — but it has already begun, and sea level is starting to show a curve upward that looks a lot like…well, the semi-notorious "hockey stick."