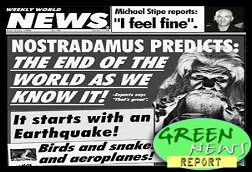 IN TODAY'S RADIO REPORT: Snow is BACK! Winter returns to parched Midwest; Time's "Person of the Year" promises action on climate change, but can he deliver?; Good and Bad 2012: top environmental stories of the year; PLUS: It's the end of the Mayan Apocalypse Myth as we know it! (And we feel fine) ... All that and more in today's Green News Report!

IN 'GREEN NEWS EXTRA' (see links below): WSJ's climate "dynamite" is a dud; U.S. Electric Grid 2030: 100% renewable, 90% of the time; 333 straight warmer than "normal" months; U.K. dash a test for global fracking; 'Peak Farmland' as a good thing; China to overhaul solar industry; Keystone XL won't use advanced spill equipment; Sea otters vs. commercial fishermen; MoJo's Eco-Doom Headline Generator; To the Moon!: yes we can grow plants in space ... PLUS: We'll 'never run this economy on renewables' --- and why we'll never have to ... and much, MUCH more! ...

Heads in the Sand:

Warning: "Climate change is occurring … and poses significant risks to humans and the environment," reports the National Academy of Sciences. As climate-change science moves in one direction, Republicans in Congress are moving in another. Why?

(The Cultural Amygdala). That leads to the Neitzche observation about meme complexs:

In individuals, insanity is rare; but in groups, parties, nations and epochs, it is the rule.

(Nietzche). And the overall observation by Emerson:

The end of the human race will be that it will eventually die of civilization.

The first oil tanker out of Albany:


A double-hulled oil tanker carrying 282,000 barrels of North Dakota crude oil — the first such shipment out of the Port of the Albany — ran aground Thursday morning on the Hudson River near Henry Hudson Park in Bethlehem, authorities said.

(Oil Tanker Runs Aground In Hudson River). Hurricane Sandy shut down the poop mills so sh*t ran down the legs of the Hudson River for a long time.

Now add some North Dakota tar sands stuff and you have a brew fit for a "sophisticated modern civilization."

Thanks for the link, Dredd. Luckily, it appears at this time that the inner hull is intact and no oil is leaking. Blech

Also, the incident doesn't inspire confidence for this little sneaky proposal from pipeline company Enbridge (owners of the Kalamazoo River spill) to reverse the pipeline flow in Eastern Canada to ship those tar sands out of ports in Maine.
http://ecowatch.org/2012...ine-communities-at-risk/

There seems to be an ongoing desperation when it comes to the Catch 22 with peak oil concepts and climate change concepts.

That desperation seems to be the result of the dichotomy, the damned if we do and damned if we don't understanding, policy makers currently defiantly embrace.

As a result we have fully loaded tar sands goo tankers going down a river sideways and helpless, after ripping a hole in its outer hull (it was a double hull this time).

Not the image of formal control of events one would expect near a large population center.

And don't forget Shell's Arctic Ocean drilling last year that ended the same way after a couple of days.

One of your articles is not true. Wind is not cheaper . Easily googled. Europe is not happy with the high cost and low output. Maine's electric bills have gone up 19% to pay for the new smart grid. They haven't even started building yet but our bills are higher. Wind from the new industrial wind farms operate at about 20% of the propaganda. And only then when the wind is blowing which is not when you need electricity.The power cannot be stored... Big Wind is notorious for paying environmentalists off for their support. Enough said.

Have a look at this and let us know what you think. I wonder if it will make it to the green news.
http://stopgreensuicide.com/

How wind power is not working from windaction.org

Nobody wants to be pushed around to make money for wall street anymore. That is all cap and trade is.

Sorry, Dogboy #6, you missed it. We did report on that, back on Dec. 18th, in the segment "Climate Change Denial Industry steps on cartoon rake AGAIN"
https://bradblog.com/?p=9787

You guys just can't help yourselves, can you? Here's a debunking by actual scientists, explaining that not only did the climate science denier who posted that get the science wrong, he apparently has problems with reading comprehension because the report does not say what he says it says. What's your excuse? Check out what actual scientists who actually know what they are talking about say about it (yes, they are laughing at you):
http://mediamatters.org/...-medias-spin-on-l/191953

Molly, you've made it abundantly clear here that you hate wind power for some reason. Strict rules and regulations should be implemented to govern the siting of wind turbines far away from residences. Otherwise, wind is far cheaper than all fossil fuels when the external costs of oil, coal and natural gas are factored in --- as you well know by now, you, the taxpayer, foot the bill in cleanup and health care costs.... and you, your children and grandchildren will pay the intangible costs of the loss of clean air, water, soil and a stable climate.

The rig that had to leave the Arctic because of dangers there has run aground on Sitkadiliak, an island in the Kodiak Archipelago.

The crew abandoned ship without loss of life.