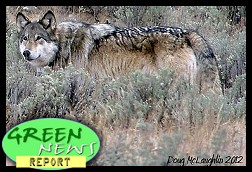 IN TODAY'S RADIO REPORT: UN climate talks in Doha, Qatar end with a whimper; Midwest weather whiplash; Enjoy snow skiing while you still can; PLUS: Sad news for the most famous wolf in Yellowstone National Park ... All that and more in today's Green News Report!

The EPA is under scrutiny:

Federal officials have given energy and mining companies permission to pollute aquifers in more than 1,500 places across the country, releasing toxic material into underground reservoirs that help supply more than half of the nation's drinking water.

In many cases, the Environmental Protection Agency has granted these so-called aquifer exemptions in Western states now stricken by drought and increasingly desperate for water.

EPA records show that portions of at least 100 drinking water aquifers have been written off because exemptions have allowed them to be used as dumping grounds.

(Poisoning The Well). Time to take off the kid gloves it would seem.