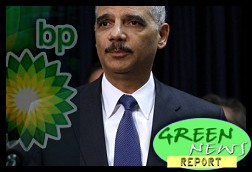 IN TODAY'S RADIO REPORT: Some justice in the Gulf: Record fines for BP in Gulf Oil Spill disaster; October 2012 the 2nd hottest on record; CA launches landmark cap-and-trade system; PLUS: The Superstorm Sandy Effect: Obama says it's time to tackle climate change --- sort of ... All that and more in today's Green News Report!

« PREVIOUS STORY "Allen West Files For 'Recount' in FL-18, But Only for Early Ballots and Only in St. Lucie County"
» Go to The BRAD BLOG front page «
"Maybe 'CRY BABIES!' Is Easier to Spell?" NEXT STORY »

Another oil platform has taken the lives of workers, injuring others.

The company was planning to begin a big-time drilling program in the Gulf (Black Elk Energy).

This is an interesting factoid:


If you’re 27 or younger, you’ve never experienced a colder-than-average month ...

« PREVIOUS STORY "Allen West Files For 'Recount' in FL-18, But Only for Early Ballots and Only in St. Lucie County"
» Go to The BRAD BLOG front page «
"Maybe 'CRY BABIES!' Is Easier to Spell?" NEXT STORY »
See MSVL and support BRAD BLOG! Click here for signed premium version!