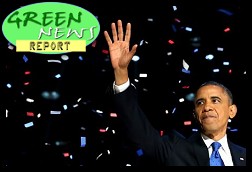 IN TODAY'S RADIO REPORT: We're back! Obama wins and talks climate change, but will he --- can he --- deliver?; Grover Norquist vs. the Koch Bros.; Will US become the Saudi Arabia of oil?; PLUS: Superstorm Sandy was very expensive ... All that and more in today's Green News Report!

Amazing how many progressives think a carbon tax will actually improve the environment. Cap and Trade allows corporations to continue to pollute. The Renewable Energy Credit money they pay to operate ends up on Wall Street, according to Matt Taiibi.

Mountain tops are bull dozed and filled with concrete. The wind farms on average perform at 18 to 25% of capacity. There is no storage for the energy so when it is hot and the wind isn't blowing , no power.

http://www.cohoctonwindwatch.blogspot.com/ this link explains how miserable the people who live around wind farms are. The animals leave.(no house payments) Many of the birds are killed. esp. birds of prey.

The propaganda aimed at progressives to sell them can only be likened to shock and awe. The Iraq war seemed like a great video game. Maine electricity bills have gone up 19% to pay for transmission lines just for wind farms' small spits and spurts of power. No transmission lines have been built. The small amt. of power from the wind farms is going to Canada.

This is known as a trade secret with First Wind, the primary builder in Maine. Locals in Mars Hill, where the first wind farm was built, had to find out that information for themselves.

The catastrophe producers have lost some ground in their incessant drive to destroy our civilization.

We must move into that ground they lost, we must wholeheartedly support Obama for the next two years, concerning climate change legislation, so the Oil-Qaeda nutjobs in the House will be outed and ultimately outed in the 2014 elections.

Then Obama and the other dems have full power to put us in the lead once again in the marathon race toward sanity.

The deniers simply do not know who their lords are, where "heaven on Earth" is, or even where "hell on Earth" is.

Molly, thanks for providing perspective on the local impacts of wind farms that are not properly regulated or sited. It is most helpful when you provide links to back up your claims.

That said, the window to avoid dangerous climate destabilization is closing.

Climate scientist Michael Mann, and the consensus of the global scientific community, is that humanity has about 5-10 years to launch a serious effort to shift to a low carbon economy to avoid potentially catastrophic outcomes.

Please keep that in mind as you advocate against wind energy without offering any low-carbon alternatives.

Is the U.S.eh? the only nation that has gone backwards regarding global warming induced climate change?

Every presidential debate since 1988 had a debate about the issue until this year.

Did President Obama today reveal that he does not really get it?

He repeated the false meme "... no single weather event can be linked directly to ... global warming" when responding to a question about Hurricane-Superstorm Sandy. He repeated the meme that was formerly applied to Hurricane Katrina.

The false meme exposed above is replaced with correct meme.

It's "man made" alright.

I can't help but wonder why you ask for my vote and call me a "denier", is because it's a very evil word game being played and your caught on the wrong side?

Man made meaning the people caused climate change vs
Man made by men in bunkers and airports, and aircraft, and bouys, all manner of insanity with secrecy and deadly force at the console of the WX OP's

this stuff is on the books now, while you still argue about science vs a UN agenda 21.

Throw one of your journalistic reporters over the fence and see what happens.

Smokey, who are you addressing in your comment? I haven't asked for your vote. I only call people who deny basic physics and basic chemistry 'deniers' --- as in the unconscionable denial of overwhelming scientific evidence --- as opposed to those who can be legitimately called 'skeptics' because of the areas of uncertainty in the impacts of global warming, and the larger impacts of climate change on earth's planetary geophysical systems. Scientists understand quite well the forces at work in the damage caused by Hurricane Sandy and other extreme events.

Not sure what else you're claiming. "Agenda 21" is a simple planning document that was never adopted by the US --- it's for developing countries to help with planning for roads, bridges, transportation, water and energy infrastructure. It's not the bullshit propaganda pushed by rightwing opportunists.

The "evidence" that I've seen so far that Sandy was caused by HAARP or weather modification experiments is unconvincing. Such theories also do not account for the other indicators of human-caused climate change, like accelerating ocean acidification. The global scientific community has concluded that humans are doing more than enough to alter our climate --- the accumulation of long-term weather trends --- thank you very much, by digging up stored CO2, burning it, and dumping the waste into our atmosphere and oceans. Please see SkepticalScience.com for more.