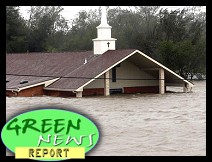 IN TODAY'S RADIO REPORT: Flooding, evacuations and levee breaching as Tropical Storm Isaac moves inland; Isaac's rain is too little too late for drought-stricken Midwest farmers, as House Republicans cut weather monitoring agencies; Hip-deep rhetoric at the RNC in Tampa; PLUS: President Obama uses the "C" word ... All that and more in today's Green News Report!

The White House website has a link to the Republican platform text.

The environment is getting cleaner and healthier. The nation’s air and waterways, as a whole, are much healthier than they were just a few decades ago. Efforts to reduce pollution, encourage recycling, educate the public, and avoid ecological degradation have been a success.

(The Right Is Wrong - 3). Anyone know what planet the Republican platform is talking about?

"Anyone know what planet the Republican platform is talking about?"

I know Rmoney calls it Kolob.


"Yesterday was August 28th 2012. Remember that date. It marks the day when the world went raving mad.

Three things of note happened. The first is that a record Arctic ice melt had just been announced by the scientists studying the region. The 2012 figure has not only beaten the previous record, established in 2007. It has beaten it three weeks before the sea ice is likely to reach its minimum extent. It reveals that global climate breakdown is proceeding more rapidly than most climate scientists expected. But you could be forgiven for missing it, as it scarcely made the news at all.
...
When your children ask how and why it all went so wrong, point them to yesterday's date, and explain that the world is not led by rational people."