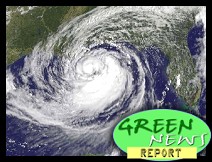 IN TODAY'S RADIO REPORT: An anxious Gulf Coast awaits Hurricane Isaac; Tampa GOP prays the storm away (rejoices when it veers towards Louisiana!); Massive refinery fire in Venezuela; More MPG for American cars, but Romney's against it; PLUS: Melting ice in the Arctic hits a new record low ... All that and more in today's Green News Report!

[Univ. of Delaware marine scientist] Andreas Muenchow, aboard the Canadian icebreaker Henry Larsen, shows the ice-free sea off Petermann Fjord that he and his colleagues were sailing in — an area that for ages had been covered by floating ice shelves. "But no more," notes Muenchow in the video.


The environment is getting cleaner and healthier. The nation’s air and waterways, as a whole, are much healthier than they were just a few decades ago. Efforts to reduce pollution, encourage recycling, educate the public, and avoid ecological degradation have been a success.

(The Right Is Wrong - 3). Anyone know what planet they are talking about?