Welcome to our newest affiliate partners, The Shannyn Moore Show --as heard on Fox News Talk Radio(!) KOAN am1020 and 95.5 FM in Anchorage, Alaska and on We Act Radio, WPWC 1480am in Washington D.C.! 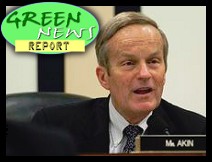 IN TODAY'S RADIO REPORT: It's official: Worst. Fire Season. Ever.; Rep. Todd Akin is not the only anti-science Republican in the US House; More industrial farming animal abuse; China ventures into the unfrozen Arctic; PLUS: Brain-eating amoebas thriving in Oklahoma ... All that and more in today's Green News Report!

IN 'GREEN NEWS EXTRA' (see links below): Record radiation found in Fukushima fish; US court strikes down new EPA pollution rules; Chevron refinery fire was 'a close call'; India blackout and the costs of air conditioning; Agriculture is a major water pollution culprit; Shell inks $1b deal to frack in China ... PLUS: Keystone XL construction begins: 'When This Oil Spills, It's 'A Whole New Monster' ... and much, MUCH more! ...

Not sure what Akin has to do with green news, but since you brought it up...how about Kerry Gauthier giving a nobby to a 17 yr old--perfectly legal of course.
http://www.startribune.c...l/166834176.html?refer=y

Well, Davey --- the House Science committee, on which Akin participates, sets policy and oversight for our most important science institutions. Akin is also a climate change denier. Science literacy is important when writing legislation, determining funding and investigating important issues of science, technology, research and innovation, don't you think?