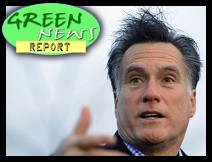 IN TODAY'S RADIO REPORT: It's official: July 2012 hottest month ever recorded in the US; Romney running against the wind (energy industry); Deadly monsoons in Asia; Major plastics spill in Hong Kong; PLUS: Bill Clinton offers good news on the path to clean energy at the National Clean Energy Summit ... All that and more in today's Green News Report!

Here's Where Farms Are Sucking The Planet Dry (NPR):


This map is disturbing, once you understand it. It's a new attempt to visualize an old problem — the shrinking of underground water reserves, in most cases because farmers are pumping out water to irrigate their crops.


About half of the nation’s water withdrawals every day are just for cooling power plants. In addition, the oil and gas industries use tens of millions of gallons a day, injecting water into aging oil fields to improve production, and to free natural gas in shale formations through hydraulic fracturing. Those numbers are not large from a national perspective, but they can be significant locally.

All told, we withdraw more water for the energy sector than for agriculture.

(Inferior Structure). As oil wells "wear out" they pump good water down into oil wells to force more oil out.

It ruins the water.

So, green energy, renewable energy is a solution to the water problem as well as the global warming problem too.

Oh yeah, and then ther's this good news too!

We all know what Citizens United has done to our election process this year. Millions of undisclosed dollars are being spent to influence elections all across the country --- and those voters don’t even know who’s trying to do the influencing.

Now states are taking it upon themselves to push Washington to address the problem.

Massachusetts just became the 7th state calling on Congress to pass a constitutional amendment to end corporate money in our elections.

So far 368,833 of you have signed my petition to overturn Citizens United, and slam the floodgates closed once and for all. That’s a great effort, and I appreciate all you have done. Now it’s time to take the next step --- let’s show our commitment to end Citizens United by getting that number up to 400,000.

I know you’re with me in this, and there’s still more you can do. Help us organize: consider making a small contribution to expand this effort as far as possible. Send your friends on Facebook the petition so they can sign on, too. Give your followers on Twitter an update --- and have them sign today.

If each of us reaches out to a handful of friends, and those friends share it with a handful of their friends, that is how grassroots organizing happens --- and why it’s so effective.

And that’s the only way we’ll see the power in elections across the country returned to its rightful owners --- the people.

Thank you for all of your help.

Sherrod
Paid for by Friends of Sherrod Brown

Thank you final fuckingly. But, I think I'll change my email. After..... shits and giggles.

OMG, I hope everyone is still following this thread. I just read a headline that has turned me...I am now joining with AGW because the nearest and dearest thing to my heart is now being threatened:

The future is bleak w/o HS Football. HS Football feeds college football which feeds professional football. You all know that Davey left Tennessee and moved to Texas (I think I told everyone else to go to hell...)...anyway life does not exist in Texas w/o football.