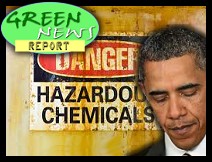 [Ed. Note: In our audio report, we mistakenly referred to 2,4-D as a pesticide; in fact, it is an herbicide. Our apologies for the error. (For the record, one kills bugs, the other kills weeds. Widespread use of both are leading to widespread resistance in their intended targets.)]

Did you notice that there is a prime suspect in the demise of bee colonies?

Or that religion may have evolved in microbes?

Anyway, your coverage of all things green is wonderful.

Thanx Brad and Desi for another great report. I know you can only comment on so much in a short report however, another dangerous decision by the Obama regime somewhat related to the unregulated use of antibiotics and steroids on poultry farms is that the entire chicken/turkey slaughter house industry will start policing themselves SAVE money.

Forget pulling cash out of the multi-billion dollar war budget to save money Caged over-crowded drug injected birds forced to live in their own excrement will now be inspected by their a farmer's own private inspectors instead of the USDA.

Private inspection of corporate farms has a history of collusion in the name of profit$. Coverups of deplorable condition, inhuman treatment of animals, and inadequate inspection of diseased meats passed onto human populations is not a concern for the Obama Administration or his super wealthy corporate owners.

However, if it is a concern of you or any carnivores you know who eat chicken, there is a 1 month comment period to voice your opinion of this change. I suppose Prez Obama stands for change afterall.