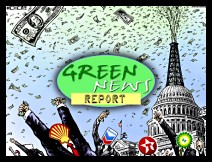 IN TODAY'S RADIO REPORT: Another big win for Big Oil in the U.S. Senate; Another offshore drilling leak threatens to become another major offshore disaster; Another warning about accelerating climate change from the U.N.; Another study explains why the Right hates science; PLUS: Poo Power! Icky turns to awesome with new energy innovation ... All that and more in today's Green News Report!

Imprisoned climate activist Tim DeChristopher has been placed into confined quarters, because “an unidentified congressman had called from Washington DC, complaining of an email that Tim had sent,” according to Peaceful Uprising.

You dirty rotten oil industry whores in Congress are going to be held accountable for your policy of giving the profitable oil and gas companies tax breaks and subsidies. (Chris Hayes on Rachel Maddow explained/exposed the system very well) THIS, while cutting away services for the least of brothers/sisters/children. This money could be used

Think the core of our planet Earth is a burning ball of centrifugal force that keeps gravity and the poles on course. What keeps that fire burning? Ahhhh maybe the oil… the oil companies are drilling deeper and deeper to get. GOD’s plan a natural wonder that destroyed most life on Earth during the time of the Dinosaurs. A million years pass and now we use the remains of the past as energy.

The messenger tells us that once the oil is almost gone, the Earth must generate more to survive. Guess what will be the oil of the future? Natural disasters will bury most of humanity if we do not change our energy policy. GOD in all his wisdom gave human beings the Sun, the wind, the wave and brain power to figure it out. The oil industry owns many cheap energy patents that it is holding back. The PEOPLE MUST MAKE DEMANDS OR WE ARE FINISHED! Lloyd the Baptist predicted this years ago on jinnbad.blogspot.com
(12/20/2009)

Big Oil buys our politicians and news anchors because profit is their only motive. They are programmed to leave rational stance off the table. The likes of the Koch Bros would dump toxins in your backyard and turn Americans into slaves if they could get away with it. Jail/prison and debt slaves are the next best thing. The Conservatives on the Supreme Court have lost their souls… it’s a generational curse too so their kids/grand kids are in trouble. They must REPENT now before it is too late…

Great coverage once again Des, so, thanks again.

Evidently the famous saying "they're back" applies to the dirty oil industry's oily hands.

« PREVIOUS STORY "Canning Interviewed by OpEdNews on the GOP's Battle Against Voting in the 'War for Wisconsin'"
» Go to The BRAD BLOG front page «
"NY Times Op-Ed Warns Unaccountable Super-PACS Likely to Be Used for Voter Suppression in 2012" NEXT STORY »
See MSVL and support BRAD BLOG! Click here for signed premium version!