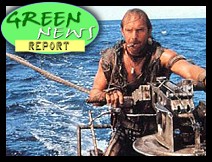 IN TODAY'S RADIO REPORT: Warning - world water crisis (and wars?) ahead; Senate to vote on repeal of Big Oil subsidies; New EPA rules: the beginning of the end for coal?; Climate scientists warn the planet is approaching tipping points; PLUS: It's confirmed - BP's oil still killing in the Gulf of Mexico... All that and more in today's Green News Report!